Users of iOS 11 will be able to restrict the gathering of location data by any third-party app so that it can only access the device's location status when the app is in use.

Previously the security setting only applied to certain apps that chose to offer it – as well as to developers wanting to test their own app's use of location data – but it appears Apple is extending the setting for any installed app in iOS 11, potentially handing an additional element of privacy back to the end user. 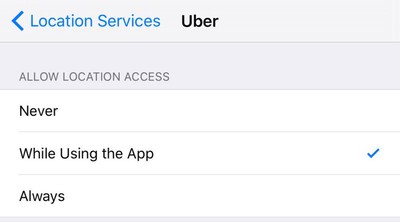 The new setting in iOS 11 should come as a welcome change for many, given that the use of device location data by some apps has been a point of controversy. For example, Uber has been criticized for forcing users to grant its app full access to location services whether it is open or not, which has been construed by some as creepy or invasive location gathering.

The new setting should also improve the battery life of devices that update to iOS 11, since it puts a limit on the amount of time GPS is activated by apps in the background.

SoN1NjA
YES!!! Been waiting for this
Thought it was so dumb how the app got the choice whether to use it Always or Never, no middle ground!

Some apps need to use my location and I'm fine with that, but they don't need it every time they feel like it
Score: 6 Votes (Like | Disagree)

canadianreader
Suck it Uber no more disabling location after using uber now I can leave it on While using the app. Great move apple
Score: 4 Votes (Like | Disagree)

DaveTheRave
This is great news!
Score: 3 Votes (Like | Disagree)
Read All Comments