Apple Paying Freelancers to Improve the Accuracy of Apple Maps

In an effort to improve Apple Maps, which many iPhone users still consider to be inferior to Google Maps, Apple has enlisted the help of contracted freelancers to validate the accuracy of points of interest and other information, in exchange for micropayments, according to French blog iGeneration. 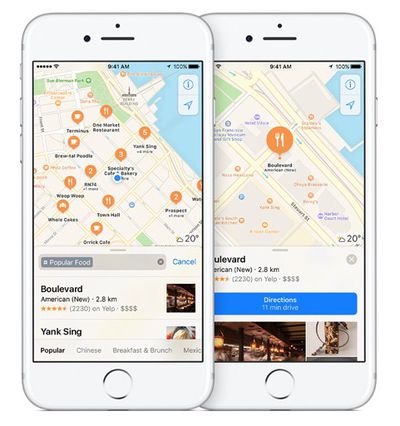 For the past year, through a platform called TryRating, Apple has reportedly paid freelancers 54 cents per task on average, with each task often only taking a few minutes to complete. The fine print allegedly limits freelancers to 600 completed tasks, and no more than 20 hours worked, per week.

The report doesn't specify how freelancers are selected, but they appear to be recruited through a third-party subcontractor.

A typical task, for example, could be verifying the accuracy and relevance of the search results that Apple Maps shows for a "McDonald's" query for a particular location. The freelancer's task would be to ensure the McDonald's restaurants listed are within a close distance, have accurate addresses, and so forth.

One of the examples Apple provides is a search from Somerville, Massachusetts for "Machu Picchu," a well-known historical site in Peru, but also the name of a local restaurant in the city. A freelancer's task would be to ensure all of the search results for "Machu Picchu" are contextually relevant.

Apple Maps launched in 2012 and was quickly criticized for having incomplete and inaccurate mapping data, which led some iPhone users on dangerous routes. Apple CEO Tim Cook offered a rare public apology for the frustration it caused customers, and then iOS chief Scott Forstall was ousted just one month later.

Apple Maps still gets a bad rap among some users, but Apple's continued efforts to improve the app should help reverse some of those opinions.

benroberts3
What Apple needs to do is create a program like Google Guides to help improve their maps through crowdsourcing. It seems like Apple is really making this a lot harder than it needs to be with this type of platform. Sure, it's nice to be compensated but only a few people can complete 600 tasks a week!

They should make it a fun program with points and goodies that is free for the general public. From there, just watch Apple maps gain loads of new places, restaurants, shops, etc. Crowd sourcing has proved to be the best way to gain local knowledge. Especially when it comes to something like maps.

I hope Apple realizes this soon before Google Maps pulls too far ahead for Apple to ever catch up.
Score: 24 Votes (Like | Disagree)

BrettApple
Heck, it doesn't even get my home address right. I'll be sitting on the couch and it always says I'm 5 minutes to home on the destinations widget. I disabled it because of that. Whereas Google Maps is spot on to our mailbox.

When people need directions to the house I always tell them not to use Apple Maps. Or go by landmarks.

This is in Kansas too, nothing special. The address just shows up nearly a mile away from where it actually is. I've submitted requests to fix it but it hasn't helped any thus far. So no surprise with this.
Score: 19 Votes (Like | Disagree)

Apple can try all it wants but google maps puts it to shame. As long as Apple continues to not use google with siri, maps, or other, it will always be somewhat of a compromise. Then again, apple maps, siri, isn't why you buy an iphone.

You can report in error in the Maps app

What part of his "I've submitted requests to fix it but it hasn't helped any thus far." isn't clear enough to understand that he has?
Score: 19 Votes (Like | Disagree)

nelsonammo
WTF Apple, you are so rich and Maps is one of your premier apps and you're relying on some 3rd party taskrabbit app that pays people 54 cents to improve the data on it?
Score: 15 Votes (Like | Disagree)

cardfan
Apple can try all it wants but google maps puts it to shame. As long as Apple continues to not use google with siri, maps, or other, it will always be somewhat of a compromise. Then again, apple maps, siri, isn't why you buy an iphone.
Score: 12 Votes (Like | Disagree)

budselectjr
Question, what exactly do all those employees do at Apple?
Score: 11 Votes (Like | Disagree)
Read All Comments