Swift Playgrounds Will Soon Be Able to Program and Control Robots, Drones, and Toys

Thursday June 1, 2017 9:24 am PDT by Joe Rossignol
Apple today announced that Swift Playgrounds, its iPad app aimed at making learning how to code interactive and fun, will be able to program and control robots, drones, musical instruments, and other toys when the latest version of the app is released at its Worldwide Developers Conference next week. 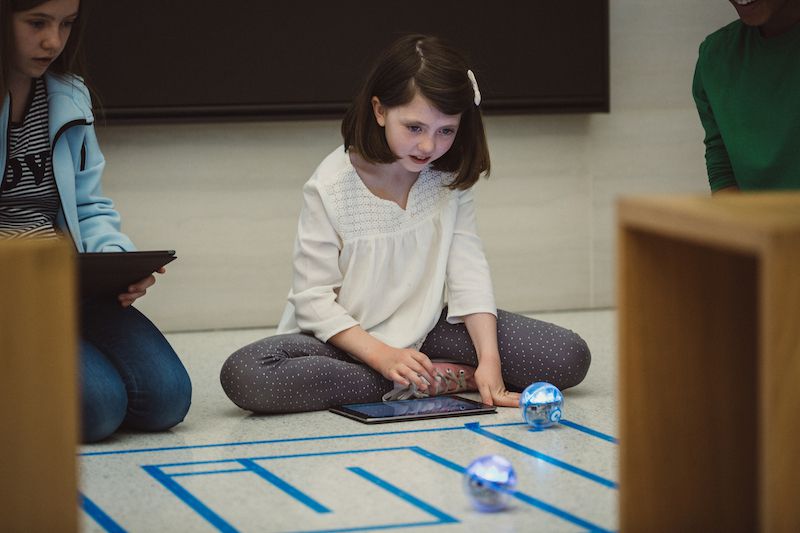 “More than 1 million kids and adults from around the world are already using Swift Playgrounds to learn the fundamentals of coding with Swift in a fun and interactive way,” said Craig Federighi, Apple’s senior vice president of Software Engineering. “Now they can instantly see the code they create and directly control their favorite robots, drones and instruments through Swift Playgrounds. It’s an incredibly exciting and powerful way to learn.”

Apple invited a small group of reporters to its Cupertino headquarters to demo the functionality, including Engadget, which put together a brief video showing off the programmable toys in action.


Swift Playgrounds requires no coding knowledge to begin with. Kids and adults alike learn how to code by completing a collection of coding lessons and challenges, and the ability to program and control robots, drones, and musical instruments will make it all the more fun. The app uses Apple's own programming language, Swift.

Swift Playgrounds is a free download on the App Store [Direct Link] for all iPad Air and iPad Pro models, and iPad mini 2 or newer.

AngerDanger
But all MacRumors readers care about is whether or not you'll be able to use Swift Playgrounds to control the production of new Macs.

mikethemartian
Does anyone remember the Logo programming language?
Rating: 7 Votes

Does anyone remember the Logo programming language?


Yes, did that on my Commodore 64. Swift (from the screen shots) reminded me a lot of Logo.


I do! :)
I used it at school 25 years ago, it was funny and helped a lot learning about simple programming patterns.


Yes, that was what I first learned on in 3rd grade on an Apple IIe. I did it faster and quicker than my peers so the teacher didn't let me do any more thinking I'd be a distraction. So she put me on a reading course on the computer. Not as much fun.


I managed to dig this out of my closet. It predates me by over a decade, but I remember it fondly: Rogifan
Something that would get huge cheers from the crowd on Monday would be Xcode for iPad. I wonder if that will ever happen.
Rating: 6 Votes

Appleaker
Its really cool to have a 1st party Apple app to do this.
Again, it seems like they could be making time for certain other announcements at WWDC.
Rating: 5 Votes

macduke
Sounds like this got cut from the presentation at the last minute because they kept going over on time—that's exciting news! My daughter is still a toddler but I'm definitely going to teach her to code and apps like this are going to be super useful. I think in the future knowing a programming language will just be like knowing any other language and maybe even necessary for most jobs.
Rating: 4 Votes

nwcs
While I am always happy to see kids get involved in thinking logically it's also been shown that the majority of people are not abstract thinkers (see Myers-Briggs). I'll paraphrase the movie Ratatouille: It's true that anyone can code but only those who are predisposed to the discipline and effort required will succeed.
[doublepost=1496334228][/doublepost]

Does anyone remember the Logo programming language?

Yes, that was what I first learned on in 3rd grade on an Apple IIe. I did it faster and quicker than my peers so the teacher didn't let me do any more thinking I'd be a distraction. So she put me on a reading course on the computer. Not as much fun.
Rating: 4 Votes

TheGenerous
All I wish is to control my Chinpokomons!
Rating: 3 Votes

thefredelement
Any person, grown or otherwise, will benefit from any exposure to programming patterns and methods. This is tremendous and exciting.

I 100% believe the the world will be a better place if everyone touched code, and understood computer science, at least at a high level. The benefits of the modes of thinking to begin to connect the dots would be tremendous for our society, we could catch fire (in a good way).

Imagine a generation, in it's entirety, familiar with computer science - Imagine one day a government, where each person, knew at least a little, of how to think abstractly and logically.

Steve Jobs once said the computer is like a bicycle for the brain. I still believe that statement to be true though we use most of our technology for entertainment when it can be so easily applied, to problems, not just as solutions themselves, but as a model for problem solving. I feel like we miss the boat but we're getting closer with things like this.

As a fan boy I obviously have my issues and feel like Tim should email me personally about certain things but this is tremendous, this will get kids excited about interacting with their env. through software, it will help them connect the dots that these things aren't just for snapchat but can be used to change the world.
Rating: 3 Votes

themick4u
Awesome news! For those of us with kids, get them involved early!
Rating: 2 Votes