macOS Sierra 10.12.5 is a free update for all customers who have a compatible machine. The update can be downloaded using the Software Update function in the Mac App Store. 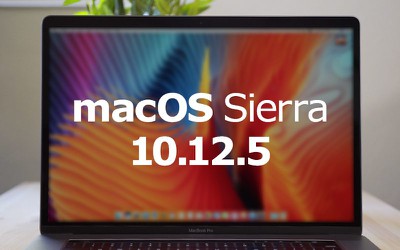 No feature additions, bug fixes, or other changes were found in macOS Sierra 10.12.5 during the beta testing process, and developers and public beta testers were only told that the update "improves the stability, compatibility, and security of your Mac." According to Apple's release notes, the following bug fixes and enhancements are included in 10.12.5:

An list of the security fixes bundled into the update is available via an accompanying support document.

Missed one via the 'find and replace' ;-)

No find and replace, just a typo. I know these release and beta posts end up sounding similar when there's not a lot in an update, but I take the time to lovingly write them out word by word each time. Numbers are hard, though, especially on Mondays! Thanks for the heads up :)
Score: 17 Votes (Like | Disagree)

Can anyone share the initial impressions after installing this update? I hope no functioning features disappear from this release...

I don't do impressions, my training is in engineering. But the install went fine.
Score: 9 Votes (Like | Disagree)

macOS Sierra 10.12.3 is a free update for all customers who have a compatible machine.

MacOS Sierra 10.12.5 update has a nasty surprise. It disables support for the nVidia Web Driver. Apple is trying to prevent people from installing new graphics cards in their Macs.

Have you only recently used web drivers? They are tied to the version of OS. NVidia has to issue updates. Usually they release betas.

Tuesday May 11, 2021 5:06 am PDT by Hartley Charlton
Apple's next MacBook Air will feature a completely new design and come in a range of colors like the 24-inch iMac, according to leaker Jon Prosser, who has now released supposedly accurate renders of the new machines based on leaked images. In a new video uploaded to YouTube channel Front Page Tech, Prosser elaborated on his previous prediction that Apple's next-generation MacBook Air models ...
Read Full Article • 97 comments