Apple today launched a new iPhone 7 video series entitled "How to Shoot on iPhone 7," featuring a range of tutorial videos that it's uploaded both to a new website and to its YouTube channel.

There are five videos on YouTube, which are designed to teach iPhone 7 and 7 Plus owners how to use the camera on their devices to capture various types of photos, including panoramas, portraits, action shorts, and more.

Each video is approximately 40 seconds in length and features a clear step-by-step tutorial on how to use each feature directly on the iPhone. For the Portrait Mode video, for example, step 1 is swiping over to Portrait Mode, while Step 2 is looking for the depth effect tag before taking the shot.


All of the videos are super simple and are going to be most useful for people who don't often use the camera or who haven't invested a lot of time in learning the features. Each video is just one or two steps, covering readily available photo features. The most complicated video, for example, covers taking a vertical panorama. 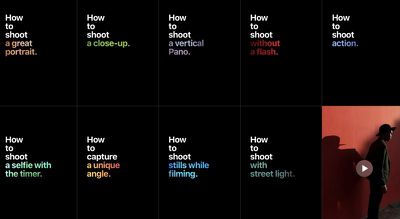 The videos on Apple's website are more specific and could be useful even to those who are familiar with the iPhone camera, as they contain tips like shooting at the golden hour for the best light, shooting a backlit subject, capturing a group portrait, shooting with street light, capturing a unique angle, and many more.

Update: More of the videos on the iPhone 7 tutorial site have now been uploaded to Apple's YouTube channel.

jerry16
How about an iPhone videography series?

It's nice to see Apple giving such these lessons . Unfortunatly all Apple YouTube videos comments are disabled. I just wish they could open up the comments section so that people can share information.

lol you know the comments will be 1% helpful, 99% about how android is better, get a real camera and child labour in their factories...
Score: 27 Votes (Like | Disagree)

Having shot on film and then digital SLRs for the last 2 decades, this statement is kind of amusing.
Score: 26 Votes (Like | Disagree)

macduke
Here are a few recent shots using my iPhone 7, shot and edited in Lightroom Mobile using the HDR shooting mode. I've saved them out at a lower resolution. Not bad at all for a phone camera—and even more so if you know how to use it. The amount of bokeh when closely focused isn't half bad, and the tonal range from the tone mapping is pretty solid, even when shooting near directly into the sun.

I'm really starting to enjoy shooting with my iPhone since the Lightroom camera update and look forward to getting some zoom and portrait mode on the redesigned iPhone. Hopefully the next camera sensor has lower noise as that's my main gripe with camera phone sensors in general.

It's nice to see Apple giving such these lessons . Unfortunatly all Apple YouTube videos comments are disabled. I just wish they could open up the comments section so that people can share information.

imnotthewalrus
These are actually quite good for the novice to intermediate user. I can't imagine a "pro" even bothering with video tutorials of any kind...
Score: 5 Votes (Like | Disagree)
Read All Comments