After spending months in preview, Microsoft today is officially launching its Visual Studio coding platform for the Mac (via VentureBeat). Visual Studio allows developers to code applications using Microsoft's integrated development environment (IDE) on Apple's macOS platform, which they can sync across both Windows and Mac devices.

Thanks to integration with Xamarin, a cross-platform software development company that Microsoft acquired last year, Visual Studio encourages macOS and iOS developers "to use Microsoft’s development tools, since they will no longer need a Windows computer or virtual machine to do so." Xamarin Studio is expected to eventually close for good following a full integration into Microsoft. 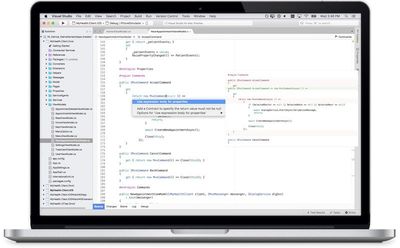 “Developers get a great IDE and a single environment to not only work on end-to-end solutions — from mobile and web apps to games — but also to integrate with and deploy to Azure,” Scott Guthrie, executive vice president of the Microsoft Cloud and Enterprise group, said in a statement. “Whether you use C#, F#, .NET Core, ASP.NET Core, Xamarin or Unity, you’ll get a best-in-class development environment, natively designed for the Mac.”

Visual Studio has been designed natively for macOS, according to Microsoft, letting developers manage their code hosted by any provider, including GitHub and Visual Studio Team Services. Developers can build, connect, and tune native mobile apps for iOS, macOS, and Android while also having the ability to create web applications thanks to support for ASP.NET Core. In terms of programming languages, the C# and F# languages are supported.

There are three different versions of Visual Studio for Mac that users can download, including Visual Studio Community, Visual Studio Professional, and Visual Studio Enterprise. Microsoft markets Community as its free, but "fully-featured," IDE for students and individual developers. Professional targets small teams with subscription benefits, while more "demanding" users and projects with larger scale are suggested to look into Enterprise.

For its cloud subscriptions, there are yearly and monthly options available to users interested in the higher-tier Visual Studio plans. An annual subscription to Visual Studio Professional costs $539/year while a monthly subscription costs $45/month. For Visual Studio Enterprise, users will pay $2,999/year or $250/month. Subscribers will be able to earn small credits back each month for the yearly tiers, contingent on their use of different Azure services.

For a detailed breakdown of the differences between each Visual Studio subscription, including individual licenses, check out the app's new website.

chrono1081
I honestly don't understand the love for Visual Studio here. I use it daily, I hate it. It's sluggish, bloated, and has quirky as hell autocomplete.
Score: 11 Votes (Like | Disagree)

longofest
Visual Studio, at least on Windows, is a first rate product, and C# is, in my opinion, one of the best languages out there bar-none.

Very excited to see it ported to Mac.
Score: 10 Votes (Like | Disagree)

jumanji
wow. i know this is primarily a mac board and yes, I'm a huge mac fan but that is actually big news.
Score: 7 Votes (Like | Disagree)

Monday August 8, 2022 10:43 am PDT by Juli Clover
With the fifth beta of iOS 16, Apple has updated the battery icon on iPhones with Face ID to display the specific battery percentage rather than just a visual representation of battery level. The new battery indicator is available on iPhone 12 and iPhone 13 models, with the exception of the 5.4-inch iPhone 12/13 mini. It is also available on the iPhone X and the iPhone XS. Battery percent...
Read Full Article • 306 comments