Logitech today announced the debut of the Logitech Slim Folio, a Bluetooth keyboard and case that's designed for the fifth-generation 9.7-inch iPad that Apple debuted earlier this year.

The Slim Folio has been designed with what Logitech says are "large, well-spaced keys" that are "stretched from edge-to-edge" and a comfortable layout to make typing quicker and easier. It also features dedicated function and iOS shortcut keys to do things like switch between apps, bring up the search function, access the Home screen, and control volume without needing to touch the iPad's display. 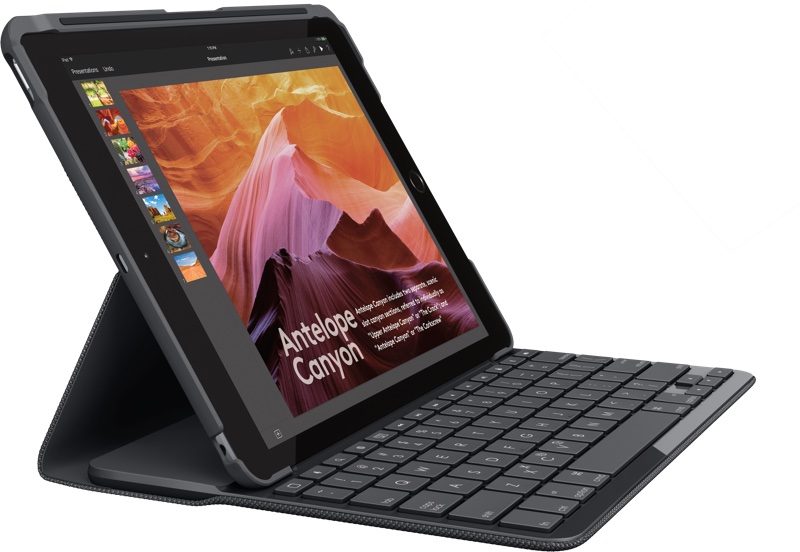 A folio-style stand locks into place at an ideal typing and viewing angle, allowing the iPad to be used equally well on a flat surface like a desk or a lap. Designed to be slim and light, the folio protects the iPad from scratches and bumps with stain resistant fabric that was originally developed for the luggage industry.

"The fifth-generation iPad is Apple's most affordable iPad to date, but there's still a learning curve typing on the new device if you're used to a laptop or desktop keyboard," said Michele Hermann, vice president of mobility at Logitech. "With four years of battery life, a lightweight design, and overall great typing experience, the Logitech SLIM FOLIO can help take your mobile computing to a new level, allowing you to enjoy laptop-like typing anywhere."

The new iPad connects to the Slim Folio over Bluetooth LE, with the keyboard automatically activating whenever the iPad is put into a typing position. Replaceable coin cell batteries that last up to four years mean there's no need for charging.

Logitech is offering pre-orders for the Slim Folio starting today from the Logitech website. The Slim Folio is priced at $99.99 and will be available globally in May.

macs4nw
Looks like another well designed product by Logitech..... can't complain about that battery life either. Our Logitech case for an Air2 has stood up very well.
Rating: 2 Votes

Hmm, seems better than my Belkin keyboard for my Air 2 iPad. Of course, I think I paid about $10 for that keyboard.

I do want pencil support. So I'm buying the next 9.7 iPad Pro. I will consider this over the Apple keyboard when I do. Or I will just slip the new Pro into my Belkin keyboard.


You definitely should consider the Logitech CREATE for the iPad Pro 9.7". It even has a slot for the pencil! Air 2 cases won't fit because of the flash on the Pro
Rating: 1 Votes

You definitely should consider the Logitech CREATE for the iPad Pro 9.7". It even has a slot for the pencil! Air 2 cases won't fit because of the flash on the Pro


I will definitely consider it. But the Belkin case and keyboard I have is very flexible. It uses adjustable tension controlled corners so it basically will fit any tablet around the 9.7" size. I believe it was designed to be able to fit the slightly larger Samsung tablets as well as the iPads. But it doesn't have a hole on the back to take pictures with the iPad in a case. But I don't care about that since I basically never take a picture with an iPad and if were I wouldn't need the case on it.
Rating: 1 Votes

jacjustjac
Looks very much like the Logitech CREATE for the 9.7 iPad Pro, which I absolutely LOVE. I actually like typing on it more than my 11.6" MacBook Air! The 12.9" version has even better chiclet-style keys, but I went with the 9.7" because the former was just TOO big and heavy.

I like how they've replicated the Smart Connector functionality by turning it on only when in the typing position. Part of the advantage of both solutions is you'll never get stray keyboard input when you don't intend it.

It's been 4 months now and the case has held up well, like a suitcase, actually. I have no qualms about throwing my iPad in my backpack (I'm a student too), and I've actually written a few whole papers on it.
Rating: 1 Votes

TallManNY
Hmm, seems better than my Belkin keyboard for my Air 2 iPad. Of course, I think I paid about $10 for that keyboard.

I do want pencil support. So I'm buying the next 9.7 iPad Pro. I will consider this over the Apple keyboard when I do. Or I will just slip the new Pro into my Belkin keyboard.
Rating: 1 Votes

satchmo
My experience with Logitech iPad keyboards are also good. The Logitech Type+ for my iPad Air has held up incredibly well, with just the odd bluetooth hiccups. The travel of keys is perfect and much better than the Apple branded cases/keyboard.

Only gripe would be to move the power on/off key away from the top right...I've accidentally hit many times because of it's close proximity to the delete/backspace key.
Rating: 1 Votes

icymountain
I have the one they released for the original iPad Air. On one hand, it was a fantastic purchase: I was able to use my iPad almost like a laptop when I needed (e.g., typing all night on a cramped airplane seat), and could turn it back to a light iPad when I was done. On the other hand, it was also quite flawed, as the clips cracked on four samples (yes, the store changed it under warranty three times, and all four samples had te problem). I am quite happy to see they improved the way it attaches to the iPad; judging by the pictures, the cracks I experienced should not be possible here. Hope it fares as well as it looks, it is a very useful accessory!
Rating: 1 Votes

diggy33
I am using the Logitech Ultrthin that I had bought with my original iPad Air. Its a great keyboard, but the magnetic strip is starting to lose its magnetism. I'll probably be picking this up when its released
Rating: 1 Votes

NinjaHERO
These Logitech keyboards look amazing. I'm definitely getting one with the new 12.9 Ipad. Whenever that comes out. :-)
Rating: 1 Votes
[ Read All Comments ]