Apple's third retail store in the United Arab Emirates opened today at the Dubai Mall, and Apple has shared several photos from its debut on the official Apple news site.

Apple Dubai Mall, located in downtown Dubai, features massive windows with an impressive view of the Burj Khalifa, the tallest structure in the world, along with the Dubai Fountain below. It spans two stories and offers the design that's been seen in newer stores like Apple Union Square, plus it includes carbon fiber "Solar Wings" and a 186-foot curved storefront.


The new Dubai store features "Today at Apple" sessions focusing on art, design music, photography, videography, and coding, a feature that debuted at the Apple Store in San Francisco last year and will soon expand to all Apple retail stores around the world. 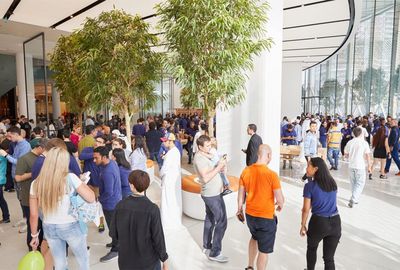 Today at Apple sessions are primarily taught by Creative Pros, which Apple has described as the "liberal arts equivalent" to its more technical Geniuses, but in select cities, well-known artists, photographers, and musicians will also teach classes.

Apple Dubai Mall is the company's third Middle Eastern store, joining stores at the Mall of the Emirates in Dubai and the Yas Mall in Abu Dhabi.

Jimmy James
A desert turned into a false oasis on the backs of slaves
Score: 6 Votes (Like | Disagree)

Ok, so my post was deleted because, apparently, for someone it was "political", but yours is ok. Voodoo or something?! :confused:

Same... still, there's a kind of irony in double standards being applied by moderators on a comment section for an article highlighting Apple's hypocrisy.
Score: 3 Votes (Like | Disagree)

A country turned into a cut-throat capitalistic imperialists on the backs of black slaves
Score: 3 Votes (Like | Disagree)

Ok, so my post was deleted because, apparently, for someone it was "political", but yours is ok. Voodoo or something?! :confused:
Score: 3 Votes (Like | Disagree)

Rambus
Disappointed not to see great whites in a circular marine aquarium & Siberian tigers prowling on the rooftop. Surely someone with more money than brains would have thought of this?
Score: 1 Votes (Like | Disagree)