Cook was named in February as the recipient of the award in the Free Speech category, which recognized the Apple CEO for having a "profound impact" on communication and for using his position to "take a public stand" on issues like racial equality, privacy, the environment, LGBT rights, and more.

According to AppleInsider, Cook used his acceptance speech to highlight the challenges involved in ensuring First Amendment rights remain a fundamental cornerstone in an increasingly technology-driven world. 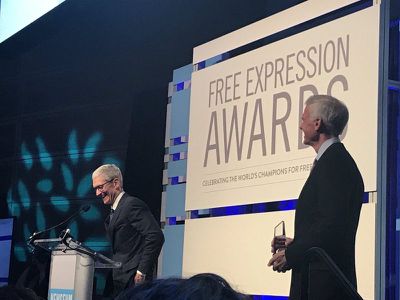 "This is a responsibility that Apple takes very seriously," Cook said. "First we defend, we work to defend these freedoms by enabling people around the world to speak up. And second, we do it by speaking up ourselves. Because companies can, and should have values."

The Newseum aims to explain and defend free expression and the five freedoms of the First Amendment through a range of interactive museum exhibits. Its annual awards ceremony is used to celebrate positive work achieved by individuals across the occupational spectrum, including government, civil rights, and journalism.

Cineplex
Oh please. Tim Cook hasn't done squat for anyone. What freedoms has he protected? He sends out a few emails a year, quotes MLK, and tells everyone he's gay and that earns a freedom award. There are many people out there more deserving of all these "honors" than Cook. He made a rainbow watch band...wow. Can we get a CEO for Apple that will focus on products instead of LGBTQ issues and world politics?
Score: 10 Votes (Like | Disagree)

Ok. So we finally know MacRumors' official stance on all of this.

No, you know the opinion of a member who volunteers his time at MacRumors.
Score: 7 Votes (Like | Disagree)

opeter
Congratulations, Mr. Cook. Now it is the right time, to update the Mac mini.
Score: 6 Votes (Like | Disagree)

HappyDude20
Considering Tim Cook's focus the past 6 years has been solely on profits for Apple, I genuinely believe he will simply steal what other visionaries such as Mark Zuckerberg unveil in the coming years. Especially when it comes to AI and Augmented Reality.

Good for Tim Cook for slightly chiming in on LGBT issues but I HATE how he is slowly destroying the wonderful Apple company that Jobs & Wozniak created.
Score: 6 Votes (Like | Disagree)

maflynn
I would prefer a CEO to be less focused on social issues and more focused on what his company is producing. Taking 3 years to figure out that professionals don't want a non upgradeable mac pro is very sad.
Score: 6 Votes (Like | Disagree)
Read All Comments