Apple Will Still Include a Lightning to Headphone Jack Adapter With This Year's iPhones, Says Barclays 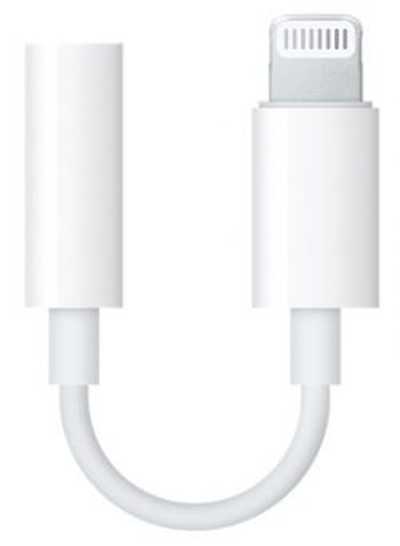 Apple will continue to include a Lightning to 3.5mm Headphone Jack Adapter with the trio of new iPhone models rumored to launch later this year, according to Barclays.

"We believe it stays this year but goes away at some point, potentially in the 2018 model," said Barclays analyst Blayne Curtis, and his associates, in a research note distributed today.

Cirrus Logic would remain the primary beneficiary within Apple's supply chain, as it's believed to provide some of the tiny audio-related components inside of the adapter.

Barclays contradicts Japanese blog Mac Otakara, which said Apple will no longer include the adapter in the box with the so-called iPhone 7s, iPhone 7s Plus, and iPhone Edition.

Apple eliminating the 3.5mm headphone jack on the iPhone 7 was a controversial decision, so it's easy to see why it might want to include the adapter in the box for at least another year. But, unlike when that iPhone launched last year, Apple's wireless AirPods and BeatsX earphones are now available.

Apple sells the Lightning to 3.5mm Headphone Jack Adapter for $9 as a standalone accessory, which is cheap by its standards, so customers that still prefer to use wired headphones won't be forced to pay too much extra whether the adapter is removed from the iPhone box this year or later.

I wonder what Steve Jobs would have to say about adding a dongle into the mix if he were still alive today...

But he's not, so let's stop bringing this hypothetical into every thread.
Score: 36 Votes (Like | Disagree)

That’s nice, but we don’t all want wireless headphones. I prefer wired headphones because they have better price/performance and reliability. You don’t have to worry if your wired headphones need to be charged or how long their batteries will last. Apple’s AirPods are nice, but are overpriced for how they sound; they sound the same as $30 EarPods, while costing $160 - a 530% markup just for wireless!
Score: 27 Votes (Like | Disagree)

I wish they'd extend that generosity toward new MacBook Pro buyers, we need adapters too.

Or even better: Build in more ports so those adapters aren’t necessary.

soupcan
Or, you know, don't drop industry standards for your own proprietary connector that adds zero value to your product AND then continue to sell your iPads/iPods/Macs with a headphone plug.
Score: 17 Votes (Like | Disagree)

Sunny1990
Better if they include AirPods :D

Iphtashu Fitz
I wonder what Steve Jobs would have to say about adding a dongle into the mix if he were still alive today...
Score: 15 Votes (Like | Disagree)
Read All Comments

Saturday June 12, 2021 3:17 pm PDT by Joe Rossignol
Apple this week previewed iOS 15, which is available now in beta for developers ahead of a public release later this year. One smaller but useful new feature added is the ability to drag and drop images, text, files, and more across apps on iPhone. MacStories editor-in-chief Federico Viticci demonstrated the new feature in a tweet: Using cross-app drag and drop on iPhone in iOS 15. Finally 🎉 #WW ...
Read Full Article • 81 comments

Friday June 11, 2021 10:27 am PDT by Joe Rossignol
We've highlighted several new features coming in macOS Monterey, such as Low Power Mode and the option to erase a Mac without reinstalling the operating system, but there are some smaller tidbits that we wanted to share. Animated Memoji on Login Screen One small but fun new feature in macOS Monterey is the addition of a personalized Memoji on the login screen, complete with animated facial...
Read Full Article • 80 comments

Saturday June 12, 2021 7:01 am PDT by Sami Fathi
In a currently unlisted ad on YouTube, Apple is promoting the versatility, portability, and power of the M1 iPad Pro in a fun musical inspired by The Little Mermaid's "Part of Your World" soundtrack. In the ad, which features the main character using an M1 iPad Pro, Magic Keyboard, and Apple Pencil, multiple users can be seen struggling with their old PCs indoors while hoping that they can...
Read Full Article • 325 comments

Friday June 11, 2021 2:32 pm PDT by Juli Clover
macOS Monterey makes several improvements to password management, positioning iCloud Keychain as an ideal password service to replace third-party services like Lastpass and 1Password. In System Preferences, there's a new "Passwords" section that houses all of your iCloud Keychain logins and passwords so they're easier to get to, edit, and manage. There's a similar Passwords section that's...
Read Full Article • 183 comments