macOS Sierra 10.12.5 can be downloaded through the Apple Developer Center or through the Software Update mechanism in the Mac App Store. 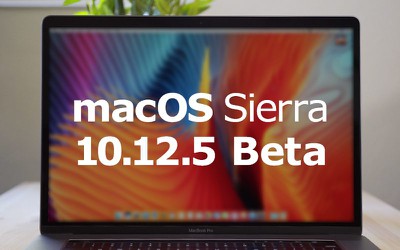 According to the release notes accompanying the beta, the update "improves the stability, compatibility, and security of your Mac."

Because Apple's release notes don't often provide much insight into what's included in new beta software, we don't yet know what features or bug fixes might be included in 10.12.5.

xflashx
It would be reallyyyy nice if they could release a detailed change-log for once other than "this update improves stability" bla bla so we know what to expect or what to look out for..
Score: 14 Votes (Like | Disagree)

It would be reallyyyy nice if they could release a detailed change-log for once other than "this update improves stability" bla bla so we know what to expect or what to look out for..

I agree, that's one of the reasons why I love the team running Safari Technology Preview, they do great release notes. I wish Apple'd do the same for all of their releases.
Score: 9 Votes (Like | Disagree)

cult hero
10.12.4 was a big deal for me. A lot of issues I've had with the Touch Bar and Thunderbolt 3 appears to have gone away. I had griped that the 2016 MBP was the most unstable Mac I have owned since the switch to Intel (that was pretty bumpy early on) each new release of Sierra, 10.12.4 in particular, has improved things.

* No more randomly vanishing portions of the Touch Bar. (I was starting to think I had bad hardware.)
* No more sleep/way system crashes while connected to Thunderbolt 2 or 3 devices.
* Far less application crashing.

As others have stated, I wish they would be more detailed in their release notes.
Score: 9 Votes (Like | Disagree)

It would be reallyyyy nice if they could release a detailed change-log for once other than "this update improves stability" bla bla so we know what to expect or what to look out for..

Exactly, we don't need any security info but they need to be more transparent on what the specific fixes would be. I mean Apple fixing a bug or glitch is a good thing why hide it under a general broad statement, be more specific and transparent.
Score: 4 Votes (Like | Disagree)

Exactly, we don't need any security info but they need to be more transparent on what the specific fixes would be. I mean Apple fixing a bug or glitch is a good thing why hide it under a general broad statement, be more specific and transparent.

I would like this with all updates including app updates. So often they say bug fixes and thats all.
Score: 3 Votes (Like | Disagree)

No, at least not for me - Retina 4K iMac and the latest macOS update VASTLY improved the overall speed and snappiness of the OS.

iOS no difference, which is a good thing as it runs beautifully as is on my iPad Mini 4.

That's what betas and reviewer testing's for - reviewers who download the latest and report in. But I get where you're coming from, sometimes it is a bit iffy not knowing what will and won't be improved etc.

This, and iOS flies since the new file System.:)
Score: 3 Votes (Like | Disagree)
Read All Comments