The House of Representatives voted this week to repeal a law previously passed by the Obama administration, requiring Internet Service Providers to gain permission from users in order to access and share certain pieces of personal information with advertisers (via The Washington Post).

The law, which was approved last year prior to the Presidential election, limited what ISPs such as Verizon, AT&T and Comcast could do with sensitive data including user location, browsing history, and even their Social Security numbers. The law also required ISPs to strengthen protections against hackers and online data thieves, and would have officially gone into effect at the end of 2017. 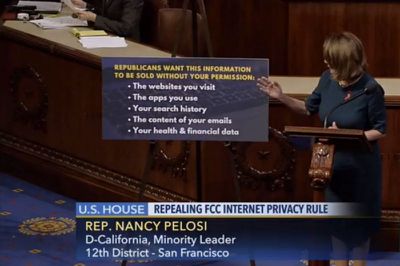 Image via The Verge
The Republican majority House has now voted to repeal these measures, with critics of the previous law arguing that the move will allow ISPs to enter a level playing field -- and subsequently increase healthy competition in the targeted online advertising market -- with companies like Google and Facebook. With the repeal, ISPs will no longer need user consent to sell their data to marketers "and other companies that mine personal data." The vote ended with 215 in favor to 205 in opposition.


In a party-line vote, House Republicans freed Internet service providers such as Verizon, AT&T and Comcast of protections approved just last year that had sought to limit what companies could do with information such as customer browsing habits, app usage history, location data and Social Security numbers. The rules also had required providers to strengthen safeguards for customer data against hackers and thieves.

The Senate has voted to nullify those measures, which were set to take effect at the end of this year. If Trump signs the legislation as expected, providers will be able to monitor their customers’ behavior online and, without their permission, use their personal and financial information to sell highly targeted ads — making them rivals to Google and Facebook in the $83 billion online advertising market.

According to The Washington Post, the repeal is considered "the first salvo" in what is expected to turn into a "significant reworking" of rules and regulations regarding internet security and privacy under the Trump administration. The repeal goes so far as to include wording that aims to prevent the Federal Communications Commission -- which drafted the original law -- from issuing similar protections in the future.

Those in support of the original FCC protections argued that ISPs require strict regulations because they represent a much broader scope of access to user data, unlike search engines which only access a snapshot of a user's browsing data. If a user is unhappy with a site's data access they can decide to stop using it, the FCC supporters argued, but switching ISPs because of potentially intrusive data mining "is far more difficult."

On the other side, supporters of this week's repeal said that strict ISP privacy regulations "stifle innovation" when providers are forced to abide by such overbearing guidelines and laws.

Tuesday’s vote is a sign that Internet providers will be treated more permissively at a time when conservatives control the executive and legislative branches. That could be a boon for companies such as Verizon and Comcast as they race to become online advertising giants.

Internet providers have historically made their money from selling access to the Web. But now these providers are looking to increase their revenue by tapping the vast troves of data their customers generate as they visit websites, watch videos, read information and download apps.

As some watchers of the repeal have noted, interest in virtual private networks has grown online in the wake of potential threats to user privacy. VPNs provide secure and encrypted connections between a user's Wi-Fi device and the VPN server, cloaking their browsing history and preventing intrusions into their private information. Major businesses and corporations most commonly use VPNs to ensure sensitive information remains private.

For the new legislation, the next step is for it to be signed by the President, at which point it will be officially enacted.

unobtainium
The Republicans of congress just showed that they're for sale to the highest bidder, in case we didn't already know that. Pure corruption.
Score: 38 Votes (Like | Disagree)

GrumpyMom
Sickening. Net neutrality is next up on the chopping block, I hear. Our government: of big business, by big business and for big business. Screw the people.
Score: 24 Votes (Like | Disagree)

shareef777
And yet there are those that still try to justify their vote for Trump and his cronies.
Score: 22 Votes (Like | Disagree)

bopajuice
If you are a Republican please explain your reasoning behind supporting this type of repeal.

After all you voted these guys into office, so I assume you support a lack of privacy and the sale of your private information?
Score: 19 Votes (Like | Disagree)

bmunge
Why is the GOP consistently on the wrong side of every issue?
Score: 15 Votes (Like | Disagree)

Crosscreek
I run a full time VPN on my desktop. I would suggest Apple add one so people have protection.
Score: 14 Votes (Like | Disagree)
Read All Comments