We did indeed see a new low-cost 9.7-inch iPad introduced via press release on Tuesday, March 21, but as it turns out, the identifiers for the new 9.7-inch iPad don't match up with the iPads Fiksu saw, suggesting there could still be additional iPad models set to be released in the not-so-distant future. 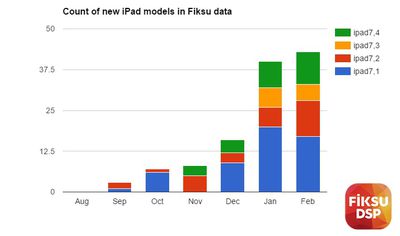 The new iPad's identifier is "iPad6,11" and "iPad6,12," with one number each for for Wi-Fi and Wi-Fi + Cellular models. Fiksu, meanwhile, saw the following identifiers in its device logs:

In the original report, Fiksu said the number of new iPad models in its data was steadily ramping up, and that in its experience, those increasing numbers indicate an "imminent" release. Fiksu suggested the new iPad models could launch within a month, which would put a release somewhere around mid-April.

There has been a lot of confusion around iPad Pro launch timelines. Rumors originally suggested a new 10.5-inch iPad Pro model, and perhaps a new 12.9-inch model would launch in the spring alongside the low-cost 9.7-inch model, but we only got the latter.

It is now unclear when we will see new iPad Pro models. The release of a low-cost 9.7-inch iPad (and a new iPhone color and new Apple Watch bands) via press release seems to suggest we aren't going to see a spring event and thus no spring launch of new iPads, but it's not an impossibility.

If a spring debut doesn't happen, we could potentially see a launch at Apple's Worldwide Developers Conference in June or Apple could hold off on a launch until the fall, introducing iPads alongside new iPhones in September. At this point, Apple's iPad plans are murky at best, and we'll need to wait for more information to narrow down a release timeline.

gadlaw
Checking daily. I still think it's an April release based on the information available.
Score: 3 Votes (Like | Disagree)

Checking daily. I still think it's an April release based on the information available.

Disagree, no parts, information hasn't been leaked. I'm thinking won't be until fall or spring 2018
Score: 3 Votes (Like | Disagree)

JeffyTheQuik
Any info on what OS they were running?

However, the longer we go without seeing a single part leak, the less likely this becomes. I can't understand how anyone believes these rumored launch time-frames when we always see casings, screens, chips, or other pieces prior to the launch. Do we really believe Apple has improved their security in this matter this much?

However, since iPads don't carry the same weight as the iPhones, in terms of revenue to Apple, the leaked parts may not carry much value. That's just a supposition, though.
Score: 2 Votes (Like | Disagree)

History leans towards Apple forking a version of the current OS in order to implement new hardware features for iPad rather than waiting for the next major version of iOS to ship.
Score: 1 Votes (Like | Disagree)

DoctorDoctor
I sure hope new iPad Pros are coming. I want to upgrade my Air but I am holding off.
Score: 1 Votes (Like | Disagree)

Any info on what OS they were running?

All four devices [are] all running either the latest public version of iOS — 10.3 — or the as-yet-unreleased iOS 11.

There's also another tidbit related to these models:

One thing we didn’t see is tests being done outside of the immediate surroundings of Apple HQ. In the past, we’ve seen tests in scattered locations around the globe — this could mean that the release is still a bit further out. On the other hand, it may be that international testing just isn’t as important for this release.

Wednesday November 30, 2022 2:39 am PST by Sami Fathi
Geekbench scores allegedly for the upcoming "M2 Max" chip have surfaced online, offering a closer look at the performance levels and specific details of the forthcoming Apple silicon processor. The Geekbench results, first spotted on Twitter, are for a Mac configuration of with the M2 Max chip, a 12-core CPU, and 96GB of memory. The Mac listed has an identifier "Mac14,6," which could be...
Read Full Article • 257 comments

Wednesday November 30, 2022 12:43 pm PST by Juli Clover
Twitter CEO Elon Musk today met with Apple CEO Tim Cook at the Apple Park campus in Cupertino, California, according to a tweet shared by Musk this afternoon. Musk thanked Cook for taking him around Apple's headquarters, with no mention of what the two might have discussed. The meeting comes just after Musk on Monday claimed that Apple has "mostly stopped" offering ads on Twitter, and that...
Read Full Article • 338 comments