Apple, Microsoft, Netflix, Facebook, Twitter, Google, and more than 60 other companies have either decided not to sign, or have yet to sign, a new legal brief filed in federal court in Hawaii this week, constituting the makings of a lawsuit looking to block the second version of President Donald Trump's travel ban (via Reuters). Trump referred to the new order as a "watered-down version" of the original, but a federal judge in Hawaii nevertheless blocked the revised order.

Over a month ago, Apple joined 100 U.S. companies in support of a legal brief that opposed the first immigration ban. That order banned Syrian refugees from entering the United States, blocked citizens of seven countries (Iraq, Iran, Somalia, Sudan, Libya, Syria, and Yemen) from entering the U.S. for 90 days, and suspended entry of all refugees entering the U.S. for 120 days. The new ban removed Iraq from the list, exempted green card and visa holders, and toned down "contentious language referring to religious minorities." 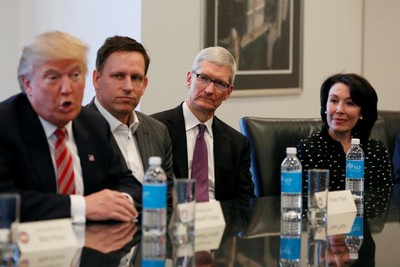 On Tuesday, a new legal brief was filed in a Hawaiian court on behalf of 58 total Silicon Valley companies voicing support for the state's blocking of Trump's order, down from 127 companies on the first brief. A few companies mentioned on the new opposition brief include Kickstarter, Airbnb, and Dropbox. Although the current list is small, hope for the lawsuit to succeed is growing, and New York lawyer Robert Atkins -- who co-authored the new brief -- said "we do expect the group to expand."

Apple Inc, Alphabet Inc's Google and Facebook Inc are among more than 60 technology companies that appear to have backed away from the legal fight against U.S. President Donald Trump's controversial travel ban, deciding not to put their weight behind a lawsuit seeking to block the second version of his executive order.

A legal brief filed in federal court in Hawaii on Tuesday on behalf of Silicon Valley companies listed the support of 58 companies, less than half the 127 signatories to a similar brief filed in an appeals court last month after Trump's first executive order banning travel from a number of countries the administration said posed a security risk.

It was not immediately clear why fewer of them signed on to the "friend-of-the-court" brief this time around.

Apple was a large part of the opposition to the travel ban last month, helping pen an open letter to Trump explaining that the U.S. is a "nation made stronger by immigrants," while Apple CEO Tim Cook said that it "is not a policy we support." Trump himself said he plans to appeal against the federal judge's halting of his revised order and take the case "as far as it needs to go," including the Supreme Court.

It is not a muslim ban because predominantly muslim countries are not impacted. It is a ban from countries with little or no effective government or databases on population to vet against for determining immigrant identification and background. Despite what a random Hawaiian court says.
Score: 12 Votes (Like | Disagree)

It's a Muslim ban, since it was declared as such during the campaign. *ooops* busted haha!

A Muslim ban is illegal, as it violates the first amendment of the constitution, which declares that the government isn't allowed to establish a religion.

A public declaration has nothing to do with what the law says. For the law (or - the EO, to be precise), a Christian Syrian can't enter the country exactly as a Muslim Syrian.
Score: 9 Votes (Like | Disagree)

All public declarations receive authority and derive from law.

Mmmm... no, we are not in a Monarchy. We're in the US. A law derives its authority by the Constitution and the law itself, not by the people writing down the law.
[doublepost=1489672908][/doublepost]

Yes, since the judicial branch looks for intent of law when deciding on validity of law.

It's not criminal or tort law. It's policy we're talking about. Intent is not meant as the mental attitude, it is meant as the ultimate 'problem' that the law itself (and not who writes it) deals with.
Score: 9 Votes (Like | Disagree)

I don't get the logic of this travel ban....

These are the countries that the Obama Administration felt were hotbeds for terrorist activities and this temporary ban is to make sure our screening process is not allowing dangerous people through.
Score: 8 Votes (Like | Disagree)

jerry16
So Apple is not listed on a legal brief opposing an executive order that has next to nothing to do with Apple.. and there is no rumor... so nothing Apple, no rumors... Yet it is on... MacRumors o_O
Score: 8 Votes (Like | Disagree)

Ban people from countries whose citizens have not attacked the US. But let in ones from countries that have....
Score: 7 Votes (Like | Disagree)
Read All Comments

Wednesday April 21, 2021 10:31 am PDT by Juli Clover
Schematics stolen from Apple supplier Quanta Computer outline Apple's plans for the next-generation MacBook Pro models that are expected in 2021, and clearly confirm plans for additional ports and a return to MagSafe. MacRumors saw the schematics after they were leaked online, and some of them feature the logic board of the next-generation MacBook Pro. On the right side of the machine,...
Read Full Article • 526 comments

Wednesday April 21, 2021 7:08 am PDT by Joe Rossignol
Apple yesterday unveiled a new 12.9-inch iPad Pro with a Liquid Retina XDR display that uses mini-LED backlighting to achieve up to 1,000 nits of full-screen brightness and up to 1,600 nits of peak brightness. With over 10,000 mini‑LEDs grouped into more than 2,500 local dimming zones, the display also has an impressive 1,000,000:1 contrast ratio. Apple has so far branded its mini-LED...
Read Full Article • 224 comments

Tuesday April 20, 2021 10:10 am PDT by Tim Hardwick
Apple today announced AirTag, a Tile-like Bluetooth tracking device that's designed to be attached to items like keys and wallets for tracking purposes, letting you find them right in the Find My app. AirTags are accessories for attaching to backpacks, luggage, and other items. Any U1 device like the iPhone 12 can be used for precision finding to guide you right to the item you're looking...
Read Full Article • 252 comments

Wednesday April 21, 2021 3:16 am PDT by Tim Hardwick
Apple's AirTag item trackers can be custom-engraved using text, numbers, and even emoji, but users looking to express some college humor will likely need to look elsewhere, because Apple's online AirTag personalization tool is easily offended. An AirTag is just big enough to fit up to four characters or up to three emoji. That might seem just enough to get dubiously creative with your...
Read Full Article • 177 comments