Apple today announced that its all-new retail store at the new Brickell City Centre shopping mall in Miami opens on Saturday, March 25 at 10:00 a.m. local time. Apple has four existing stores in the Miami area, but this will be the first to be located in the city's thriving downtown core. 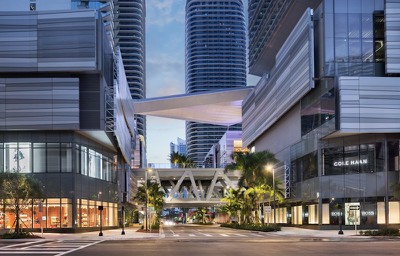 Apple Brickell City Centre will be one of three Apple retail stores to open on that day alongside new locations at Schildergasse in Cologne, Germany and Jinmao Place in Nanjing, China, which also open at 10:00 a.m. local time respectively. All three are brand new stores, not renovated or relocated ones.

Brickell City Centre is a new shopping and mixed-use development in Miami's financial district. Apple's plans to open a retail store there were revealed in February 2016, and construction began shortly afterwards. The location is expected to be one of Apple's largest retail stores in Florida.

Apple continues to renovate and expand a number of its stores across the United States with a new design introduced in 2015, including its relocated St. Johns Town Center store that opened March 11 in Jacksonville, Florida. Apple's Woodland Mall store in Grand Rapids, Michigan is next on the docket.

Elsewhere in the United States, Apple's expanded Pentagon City store in the Washington D.C. area reopened on March 4, while its Danbury, Connecticut store location closed for renovations in early February.

As a lot of people use computers for work as well as home using a mac gives peace of mind in terms of reliability and support so they are willing to pay more. Some reports suggest that owning a pc is just as costly what with paid repairs and support down the line.
Score: 4 Votes (Like | Disagree)

TheTruth101
Why not? Brickell is plagued with rich pimps, drug lords and Russian and latin... exotic ladies (who happen to be for sale as well). Each of those pearls use at least 7 different phones.
Score: 4 Votes (Like | Disagree)

As a Miami resident I find it ridiculous that they're opening yet ANOTHER Apple Store in this area when there's so many other places in the country that don't have one.

Knowing this location it'll likely be 95% tourists buying iPhones with cash to take home to resell in their home countries in South America.

It's insane; I don't think I'd ever seen that much cash in one place before back when I was buying my iPhone 6 in Miami Beach. Stacks of $100s flying around constantly.

EDIT: Heh, I Just realized I answered my own question earlier. Of course Apple wants to open more stores here if it means getting more of that hard tourist currency. But still, so many smaller cities could use an Apple Store.

Of course miami needs another store. Lincoln road is always bursting at the seems with tourists and locals alike. It's a tiny store. And a 10 minute drive is somewhat optimistic once you factor in humungous traffic over Biscayne bridge and downtown as well as parking. You must be confusing your car with a time machine
Score: 3 Votes (Like | Disagree)

As a lot of people use computers for work as well as home using a mac gives peace of mind in terms of reliability and support so they are willing to pay more. Some reports suggest that owning a pc is just as costly what with paid repairs and support down the line.

As someone who just had to buy a Windows 10 upgrade to bring a laptop out of Windows 8, I will second that the PCs have hidden costs. Frankly, if I were doing a smallish startup from scratch, I'd not use Windows machines. It would be Macs all around. The hidden and IT costs are too large on PCs.
Score: 3 Votes (Like | Disagree)

SoN1NjA
Lol, wish I had 2 Apple Stores within 10 minutes away from me
Score: 2 Votes (Like | Disagree)

snowboarder
any new Macs to buy in those new stores by any chance?
Score: 1 Votes (Like | Disagree)
Read All Comments