Game of Thrones stars Sophie Turner and Maisie Williams have announced via Twitter that they are filming for Apple Music's upcoming Carpool Karaoke: The Series. The two revealed their involvement with Apple's new television series while they were at South by Southwest to discuss Game of Thrones. 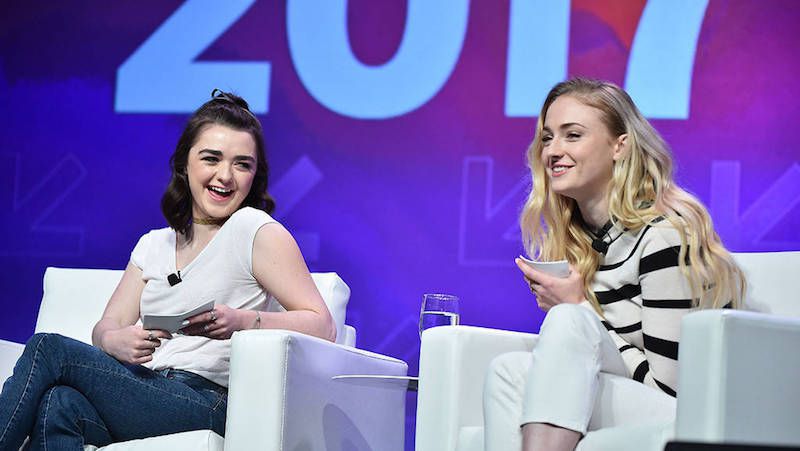 Carpool Karaoke: The Series will feature 16 celebrity pairings "riding along in a car together as they sing tunes from their personal playlists" and "surprise fans who don't expect to see big stars belting out tunes one lane over." Other than the newly announced Game of Thrones stars, the show will include James Corden, Will Smith, Billy Eichner, Metallica, Alicia Keys, John Legend, Ariana Grande, Seth MacFarlane, Chelsea Handler, Blake Shelton, Michael Strahan, John Cena, Shaquille O’Neal, and more.

Over the course of 16 half-hour episodes, Apple hopes that the show will drive interest and new subscribers to its Apple Music streaming service with original content they can't find anywhere else. In addition, Apple is also working on Dr. Dre's Vital Signs and the reality competition show Planet of the Apps, which recently launched its first trailer.

This is definitely more important than new Mac's. :rolleyes:

When I read of people defending Apple's decision to ignore or cut "niche" products like the Mac Pro or Aperture, then read an article about this sort of thing, I feel a bit put off of Apple. Then when I see what Siri is like compared to the other AI assistants I've been trying, and think of how much further along Siri should have been by now, I feel a bit sick.

It's not that I have anything against Carpool Karaoke, but I don't see how Apple puts the money into something this kooky and let so many promising, pertinent aspects of their business wither away.
Rating: 5 Votes

Over the course of 16 half-hour episodes, Apple hopes that the show will drive interest and new subscribers to its Apple Music streaming service with original content they can't find anywhere else.

Over the course of 16 half-hour episodes, the show will drive interest anywhere else.
FTFY;):D
Rating: 4 Votes

WBRacing
This sort of news just reminds me that Apple has become a company that is no longer interested in getting my business.
Rating: 4 Votes

Funny... This is the kind of exclusive original content that'll have me ditching Apple Music in a heartbeat.

Why? You're not forced to watch it.
Rating: 3 Votes

simonmet
I love those two actresses but of what interest is Carpool Karaoke with non-singers?

Or perhaps even with singers?
Rating: 3 Votes

Over the course of 16 half-hour episodes, Apple hopes that the show will drive interest and new subscribers to its Apple Music streaming service with original content they can't find anywhere else.

Funny... This is the kind of exclusive original content that'll have me ditching Apple Music in a heartbeat.
Rating: 2 Votes

dominiongamma
Apple has become a joke to appeal to kiddies instead of pro users.
Rating: 2 Votes

If it was that "old" of news, current stars wouldn't waste their time with it.

This show has zero interest from me, but I feel like it will end up doing well and grab interest from a lot of people. If so many reality shows like the Voice or X factor or American Idol or whatever other ridiculous ones that are the same thing every season have had the success they have/had then I don't see why this fad won't last longer.


Apple is just paying these stars. My guess is they are doing it for their bank accounts. They likely could care less about the show itself.
The problem is this concept is already old, it's been done before. New faces aren't going to make it any more interesting. Most people want "original" content, not rehashed versions of shows people have already seen.
Rating: 1 Votes

ryanflanders256
Why all the negative comments? Apple is going into the car business, and they're already in the music business.

Carpool Karaoke lets Apple promote two things at once. And it's fun. Have you seen any of the original episodes?

I like the Red Hot Chili Peppers episode the best.