Jonathan Blow's console and PC puzzle game The Witness has launched on the Mac App Store a little over a year after first debuting on PS4 and Windows PCs. Like other platforms, the game costs $39.99 [Direct Link] and tasks players with deciphering hundreds of puzzles set on a mysterious island.

Since its release early last year the game has received critical acclaim for its puzzle design, graphics, and secrets-filled backstory. The macOS version ports the same game and experience over to Apple computers running macOS 10.11.6 or later with 4GB of RAM and 5GB available storage space. The game also requires Apple's new Metal graphics technology to run. 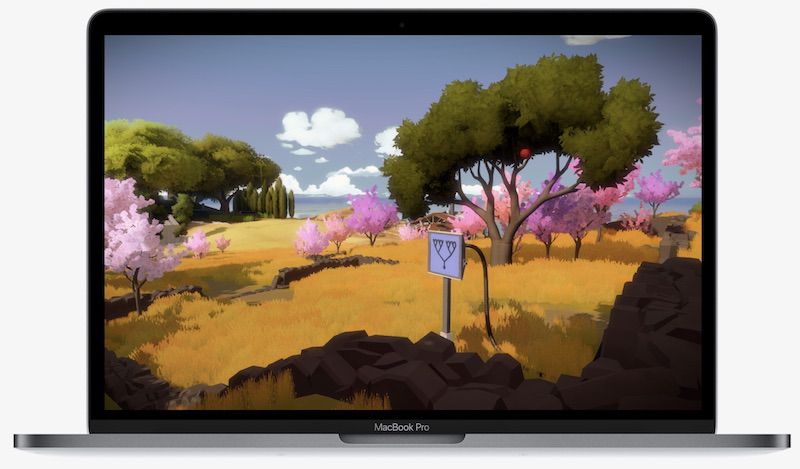 You wake up, alone, on a strange island full of puzzles that will challenge and surprise you.

You don't remember who you are, and you don't remember how you got here, but there's one thing you can do: explore the island in hope of discovering clues, regaining your memory, and somehow finding your way home.

The Witness is a single-player game in an open world with dozens of locations to explore and over 500 puzzles. This game respects you as an intelligent player and it treats your time as precious. There's no filler; each of those puzzles brings its own new idea into the mix. So, this is a game full of ideas.

An iOS port of the game has long been in development, and a few developers at Thekla -- the game's creators -- mentioned in passing recently that the game is still being worked on for iOS, but a launch date is unspecified. Since The Witness is so graphically intensive, the iOS port will require a longer gestation to pare down the visuals in order to run properly on Apple's smartphones and tablets.


The Witness is available today for $39.99 on the Mac App Store [Direct Link]. A Mac version of the game on Steam is also said to be coming in the next few weeks.

Billberryjuice
FYI it's currently the primary reward game on Humble Monthly, meaning for $12 you get it and a bunch of other (as yet unrevealed) games, with no subscription committment. I'm assuming you get a steam key that will work on both PC and Mac when the MacOS Steam version becomes available. Either way, definitely not worth paying full price if you're interested!

"I normally like puzzle games, but this one is where I draw the line"

I did really love this game for it's Eureka moments, but it can get frustrating at times.
Rating: 3 Votes

ArtOfWarfare
I'm interested in this game mostly because it's from the guy who made Braid.
Rating: 3 Votes

I'm interested in this game mostly because it's from the guy who made Braid.

Braid is truly incredible, probably my favorite XBLA game on the 360.
Rating: 3 Votes

Xavier
Seems like it has a Myst vibe to me. Having loved Myst, I might give this a look.
Rating: 2 Votes

The level of frustration has been my biggest caution before buying it. I've seen people go NUTS online, drawing maps on paper and stuff, and I just have no idea if I have the patience to play the game and not just search for answers online.


Whatever you do, do NOT look up answers for this game. If you are done, completed, then go read the reams of info about it. Maybe walk through things you missed. But this game is a master class in game design where the process of solving one puzzle is almost always training for solving another by building on an implied and explicit rule set. If you can't solve a puzzle, it's likely that you haven't found the requisite ones that would inform you as to how that one works. But there are only a few that stand out that way that you have access to before you are "ready." The majority are couched as series within their individual zones. So if you don't understand one puzzle, you likely only need to back up one or two in the series to reexamine how your assumptions might be wrong and how you've gotten the right answer but for the wrong reasons. Honestly, a little frustration here and there will make the solves and the entire experience that much more gratifying when it clicks. Every puzzle is absolutely fair. It may sound trite, but I truly feel that you'll only be cheating yourself and compromising the experience, intent and message of the game if you use or even infrequently reference a guide.
Rating: 2 Votes

chriscrk
Breath of the Wild is the best game ever.
Rating: 1 Votes

The level of frustration has been my biggest caution before buying it. I've seen people go NUTS online, drawing maps on paper and stuff, and I just have no idea if I have the patience to play the game and not just search for answers online.


The one warning I would give a new player (without spoiling anything) is that there are a couple of areas where the puzzles are impossible to solve because the game hasn't introduced the 'rule' to you yet, which may be on the other side of the island. Don't frustrate yourself trying to brute force it and just enjoy the simple pleasure of exploring the island until you find the area that introduces that rule.

It's brilliantly rewarding when you do solve those hard puzzles though and all the puzzle themes have a logical process that try to teach you each 'rule'. Aside from the puzzles, there really is a beautiful attention to detail, thoughtfulness and deliberateness to nearly every part of the islands design.

Sorry, I sound like some shill trying to flog you the game, I just really enjoyed it. If the prospect of doing hundreds of line puzzles bores you though, your caution may well be deserved.
Rating: 1 Votes
[ Read All Comments ]