The Nintendo Switch launches worldwide tomorrow, March 3, and as journalists and reviewers have had their hands on the console for the past week, news of its hardware and software features have been shared online.

This week, Quartz technology reporter Mike Murphy discovered that when plugging the Nintendo Switch into a MacBook Pro through a dual USB-C cable, the Switch inexplicably acts as an external battery pack for the Apple laptop, providing charge to the MacBook instead of being charged itself. In the image, it appears that a third party USB-C cable is being used to connect the two devices (in the box, Switch only comes with a USB-C to AC adapter cable). 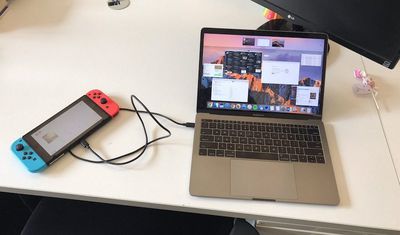 Lol if you plug a Nintendo Switch into a new MacBook Pro, the Switch charges the laptop, not the other way around pic.twitter.com/YJhMct6fKO — Mike Murphy (@mcwm) March 1, 2017

Murphy also discovered a slight workaround: if users power down the Switch before connecting it to the MacBook, then the MacBook will charge the Switch. The Switch will also charge off of Apple's USB-C wall adapter cable bundled in recent MacBook boxes, and sold separately online.

Nintendo confirmed on its website that the Switch has a non-removable 4310mAh, 3.7V Lithium-ion battery, and early FCC filings -- as well as recent pictures -- of the included AC adapter confirmed that the console draws power up to 15.0V/2.6A, equating to 39W. The non-Touch Bar MacBook Pro has a 54.5-watt-hour lithium-polymer battery and can draw up to 61W from a power adapter.

Since much of Nintendo Switch's battery-related questions are still up in the air in the time before launch, it remains unclear why the console would not automatically leech charge off the larger MacBook Pro. As game designer Bennett Foddy pointed out on Twitter, the connection between the Switch and MacBook Pro isn't inherently buggy or wrong, but it's easy to think that the MacBook Pro (battery life ~10 hours) would naturally provide power to the Switch (battery life 2.5-6.5 hours), like it does to iPhones and iPads.

In related Nintendo Switch and Apple news, Nintendo today launched its Nintendo Switch Parental Control app for iOS devices on the App Store [Direct Link]. The app will let parents remotely control the content of the games their kids play, as well as for how long, and even be able to restrict certain ESRB ratings and online features.

Lol, care to post that link??
That sounds ABSOLUTELY unbelievable.
The power would draw from the 1st plugged in cable, treating the other as an accessory cable.

dannys1
Powering down the Switch first isn't a "work around" this is how USB-C PD works.

You'll also find if you plug the power adapter into the MacBook first, then the Switch into a USB-C port, the switch will start charging.
Score: 3 Votes (Like | Disagree)

I would imagine if the MacBook is being powered through the AC adapter, then the Switch would begin charging as well.

I think you mean the Switch would begin charging the wall.
Score: 2 Votes (Like | Disagree)

weird. What about if the MacBook is simultaneously being charged from a wall outlet...

I would imagine if the MacBook is being powered through the AC adapter, then the Switch would begin charging as well.
Score: 1 Votes (Like | Disagree)

I would imagine if the MacBook is being powered through the AC adapter, then the Switch would begin charging as well.

Who knows. A guy on YouTube tried to see what happened if he plugged the MBP into multiple chargers simultaneously, and I think he damaged the computer and it wouldn't charge at all.
Score: 1 Votes (Like | Disagree)
Read All Comments