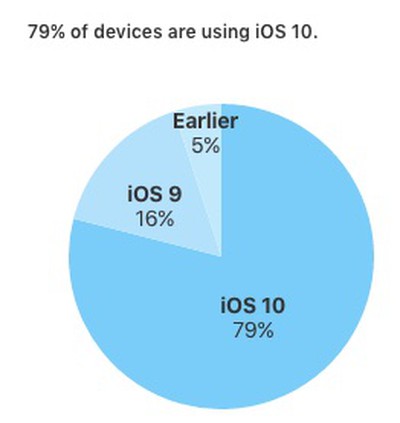 Just over five months after iOS 10 was released to the public, the operating system is now installed on 79% of active iOS devices, according to the latest adoption data shared by Apple.

iOS 9 remains installed on 16% of active iPhone, iPad, and iPod touch devices, while 5% of devices are running an earlier iOS version, as measured by the App Store on February 20.

iOS 10 could see further adoption when iOS 10.3, which is currently in beta for developers and public testers, is officially released. The software update's key new features include "Find My AirPods" and a switch to the all-new Apple File System (APFS).

iOS adoption continues to significantly outpace Android. Nougat, the latest version of Android, is installed on just 1.2% of active Android devices as of February 6, despite being released six months ago today. Android Lollipop, released in November 2014, is still installed on 32.9% of active devices.

Apple's control over both hardware and software gives it an advantage over the Android ecosystem, while Apple persistently notifies iPhone, iPad, and iPod touch users to update to the latest iOS version, including offering the option to have the software update install overnight while the device is plugged in.

masterhiggins
Hard to be impressed when your device tricks you into upgrading through random popup reminders.

It's happened before whilst I was playing a game that requires key presses in the exact same space.
Score: 35 Votes (Like | Disagree)

keysofanxiety
Meanwhile, at the Legion of Doom:

jonnysods
I honestly feel like they make it run slower on the previous gen devices.
Score: 26 Votes (Like | Disagree)

Bet the 10.2 jailbreak increased that a bit
Since the only jailbreak was 9.3, there were still a few users that had to stay on 9

Still keep pushing my friends and family to 10, iOS 10 is the best version of iOS that's ever been released, with updates to Messages, a redesigned Maps app, new Photos features, Siri to control your home with the new Home app, and a better experience to jam out to your favorite songs with an all new Apple Music app

Vast vast vast majorities of people do not jailbreak. It is a non-factor.
Score: 21 Votes (Like | Disagree)

Apple applies serious psyOps when it comes to updating these days. Screen nag after nag after nag. And it knows when you are in a rush and need to access info ASAP because that is when it sends the friendly pop-up asking if you want to update now... no? OK, tonight! Hey user I said TONIGHT! Heh.

It take a special person or an unsupported hardware owner not to update Apple OSes these days.
Score: 18 Votes (Like | Disagree)

now i see it
Proof that extremely annoying and persistent nag screens work. Bummer. That only feeds Apple's cause to continue doing it forever. I wonder how many people would have "downgraded" to iOS 10 if they could have turned that nagging off for good.
Score: 14 Votes (Like | Disagree)
Read All Comments

Tuesday May 4, 2021 9:51 am PDT by Juli Clover
Just after Apple announced its AirTags, Tile CEO CJ Prober relayed his concerns about competing with Apple in the tracking space, and said that Tile would ask Congress to investigate Apple's business practices specific to Find My and item trackers. Prober this week did an interview with Bloomberg, where he further expanded on Tile's complaints about Apple and why he feels that Tile is...
Read Full Article • 417 comments

Saturday May 1, 2021 10:41 am PDT by Sami Fathi
Apple is laying the groundwork for adding HiFi support to Apple Music which would offer Apple Music subscribers and owners of compatible devices, such as certain models of AirPods, access to high-fidelity audio streaming, according to code within the iOS 14.6 beta discovered by MacRumors. Earlier today, a report claimed that Apple will announce a new $9.99 per month Apple Music tier that...
Read Full Article • 212 comments