Apple's spaceship-shaped campus in Cupertino, California has been under construction for several years and is one of the most expensive, ambitious buildings in the United States.

While Apple has been hard at work putting the finishing touches on the campus, which is slated to open later this year, Minecraft player Alex Westerlund has been building a Minecraft version of Apple's second campus.


According to Westerlund, building the campus in Minecraft took him 232 hours over the course of a year. He used construction plans along with topographical maps to create an accurate rendition of the campus, down to the land it's built on.

As can be seen in the video, the ring-shaped main building has been faithfully recreated, with its curved glass windows, massive doors, solar panels, window awnings, and more. Westerlund says the main building is "absolutely massive" at 469 blocks across, with every hill, path, and orchard placed according to construction plans. 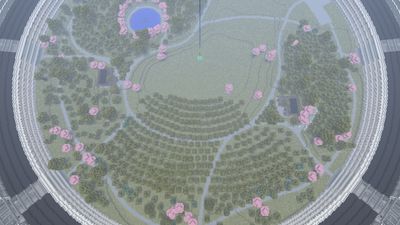 The courtyard of the building includes trails, two cafes, a cafeteria patio, cherry trees, a fitness center, and a fountain, while the interior features atriums and a huge cafeteria built to match a publicly released rendering.

Apple's real second campus is nearing completion. According to the latest drone video, construction crews are hard at work on landscaping and are wrapping up work on solar panels and a nearby research and development facility. The campus is expected to be finished in 2017, but exactly when employees will move in remains unclear.

Westerlund tells MacRumors that as Apple continues work on its campus, he'll continue to flesh out his virtual version, putting in up to four hours of active building time per day.

You don't know the guy nor how he lives.
He could well be unemployed, retired, has plenty of money so he does not have to work, disabled .....or other reasons.

232 hours sounds like a lot, but I suppose that's because he placed every block by hand. You could probably get a similar result in a lot less time using tools to modify worlds outside of minecraft, but I doubt it have the same polish. This the voxel equivalent of creating fine pixel art.

232 hours IS a lot of time. But if you break it down, it's only 4.5 hours a week over the course of a year. I KNOW many of us waste more time than that doing trivial things.
Score: 8 Votes (Like | Disagree)

Centris 650
If I had done that my kids would have come in and placed TNT all under it, detonated it then asked me to build it again.
Score: 6 Votes (Like | Disagree)

iansilv
Why do all these apple videos have the same thought-invoking electronic music?

Someone needs to break the mold with an iPhone X concept video with Slayer as the music...
Score: 2 Votes (Like | Disagree)
Read All Comments