Other countries where the bundle is now available include Austria, Brazil, Czech Republic, Denmark, Finland, Hungary, Japan, Malaysia, the Netherlands, Norway, Poland, the Philippines, Portugal, Russia, South Korea, Switzerland, Sweden, Thailand, and Turkey. If we spot any others, we'll add them to this list. 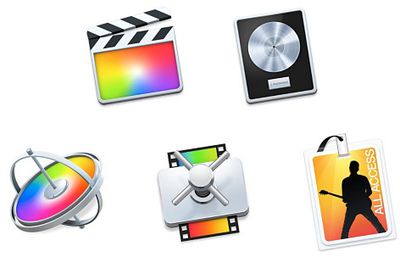 The education bundle, available to qualifying students and faculty, includes permanent copies of Final Cut Pro X, Logic Pro X, Motion 5, Compressor 4, and MainStage 3 for a significant discount. In the United States, for example, the five apps usually cost $629.95, while the bundle is $199.99—a savings of over $425.

After purchasing the bundle, education customers will receive an email with codes to redeem the apps on the Mac App Store.

Does anyone know how Apple validate your student status?

UNiDAYS in some countries, including the UK.
Score: 5 Votes (Like | Disagree)

Will these Apple apps will have the same fate as Aperture or like any of their apps? They lowered the price then the development has slowed down. Or they just leave it there but no longer their main focus of developement. Like iWorks it's there but an occasional improvement whenever they remember. Eventually it's a free but we cannot complain because it's FREE. If you look how Macs prices are going up could this be a throw away apps in the future to entice people to join Apple. :rolleyes:

I believe the business model is to hook people in with the software which embeds them into the Apple ecosystem leading to increased sales of higher revenue hardware.

If they don't keep developing the software people won't buy the hardware. Text applications like iWork's aren't comparable in sophistication to music software like logic.

They won't abandon logic or fcpx as Apple are heavily invested in the entertainment world. It's good kudos to be associated with the film and music industry softwarewise. As it increases brand awareness.

Logic is industry standard. In many recording studios. They just released an update that was so feature packed. It's an insane piece of software.

You hook kids in with cut down price mac only software, you have them locked into the Apple brand by the time they become adults. They could even give the software for free and it would still make great business. sense.
Score: 4 Votes (Like | Disagree)

HobeSoundDarryl
Anyone who follows what I contribute around here knows that I'm neither fan nor troll- I just call it as I see it. I can be very positive or very negative about Apple based on the decisions they make and how I see them. I'm usually somewhere in the middle and most appreciate other contributors who also show some objectivity instead of the extremists who always gush praise or rant hate for all things Apple no matter what.

That said, IMO, this is a freakin' bargain for any Mac people that need very good tools with deluxe capabilities. I have some of these and paid much more than this price for them (and don't feel cheated based on how much value I've long since got out of them).

I use FCPX the most and think it is easily worth well more than this bundle price all by itself. It's like the terrific iMovie 06, all grown up with everything that was missing, plus faster & better.

If someone is relatively serious about video or music and has the student credentials & $200 bucks, don't even blink. Get it while you can. How often do we get to comment about Apple and "bargain" at the same time (and not be intoxicated on the kool aid)? That's what this is: the very, very rare, REAL Apple bargain.

Still aggravated about the headphone jack for proprietary jack decision, still frustrated about the lack of 4K on :apple:TV4, still disappointed at the Pages 09 page layout deprecation for Pages iOS compatibility, and "thinner" vs. ejecting common-use ports, dongle-mania, etc. So no, I'm not Tim or any of the Exec crew. But wow, this is a real Apple deal for anyone that needs these kinds of tools.
Score: 4 Votes (Like | Disagree)

MichaelQ
Does anyone know if this is a limited time deal or an ongoing offer for now?
Score: 2 Votes (Like | Disagree)

Friday November 25, 2022 2:58 am PST by Sami Fathi
An Apple engineer has addressed the lack of lossless audio support in the second-generation AirPods Pro in a new interview. Current Bluetooth technology in the AirPods lineup means that Apple's audio products do not support Apple Music Lossless audio. Apple has previously hinted that it may develop its own codec and connectivity standard that builds on AirPlay and supports higher quality...
Read Full Article • 226 comments