Apple Pay is now accepted by 36 percent of merchants in the United States, according to research conducted by retail consulting firm Boston Retail Partners and shared by NFC World. That's up from 16 percent last year.

Boston Retail Partners derived its information from a survey of more than 500 top North American retailers. 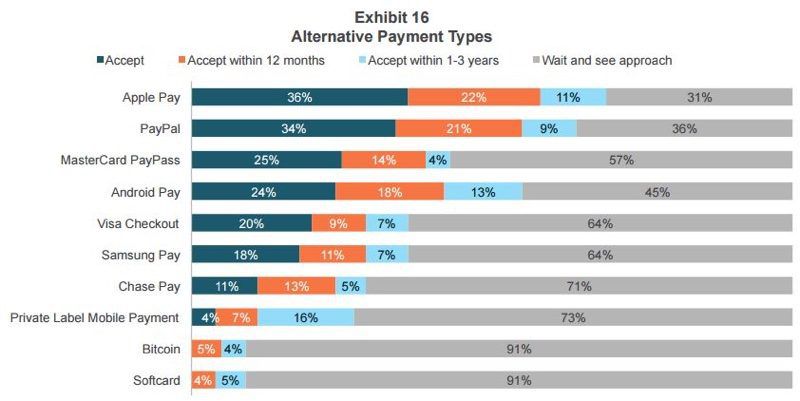 PayPal was the next most widely accepted payments service at 34 percent, while MasterCard's PayPass came in third with 25 percent. 24 percent of merchants claimed support for Android Pay, while 18 percent said they accept Samsung Pay. Given that many of these technologies are all NFC-based and accepted anywhere NFC payments are available, it seems merchants may be referring to "official" support or may be unaware of the way contactless payments work.

"PayPal has been bumped out of its top spot in this year's survey, with Apple Pay now being accepted at 36% of the retailers participating in the survey. This is up significantly from 16% last year, and signals a growing acceptance by retailers and customers."

"This year, fewer retailers are adopting a wait and see approach for Apple Pay and PayPal -- likely because of the growing support from the payment software ecosystem and the acceptance for these mobile payments by the public."

I'm still surprised by amount of retailers in my area who don't support Apple Pay. I don't use it as much as I thought I would, even with my Apple Watch. Maybe it's because I just prefer the plastic. Is plastic that old school?


Personally, now that the "chip" is everywhere, this was all the motivation I needed to start looking for Apple Pay.

Whoever designed the chip system should be ashamed. Way worse than swiping ever was.

I especially like the horrid error tone that plays to tell you to remove your card after a successful transition.
Rating: 7 Votes

They also left out payWave and expressPay (Visa, AMEX Contactless). They should have lumped contactless into one. They did Visa Checkout but left out the equivalent Masterpass.

It also is lumping in-person and online payments into one. Visa Checkout is online-only, Paypal and Bitcoin are mostly online, a bunch are both. And of course, there's a bunch of merchants who support Apple Pay online only, like Target.
Rating: 5 Votes

magicvash
The problem is, most cashiers don't know that NFC payments are supported. Or, the machine is kept behind the counter, and they ask for your credit card to swipe it. Then there's all the times were the NFC part doesn't work randomly, and so you're stuck swiping were inserting the trip.There needs to be a lot more training at these retailers to update their staff. Hell, even at McDonald's, which was supposed to have Apple Pay since forever, I find that some of the staff are constantly shocked/surprised. The drive-through is even more of a pain, because they have to take out the credit card reader machine, and show it to me. Almost makes it easier to get my fat ass out of the car and walk inside the store
Rating: 5 Votes

NexusUser
Samsung pay is accepted basically everywhere a regular credit card is accepted... This might as well have been a survey of how well marketed are these tech terms!
Rating: 4 Votes

The problem is, most cashiers don't know that NFC payments are supported. Or, the machine is kept behind the counter, and they ask for your credit card to swipe it. Then there's all the times were the NFC part doesn't work randomly, and so you're stuck swiping were inserting the trip.There needs to be a lot more training at these retailers to update their staff. Hell, even at McDonald's, which was supposed to have Apple Pay since forever, I find that some of the staff are constantly shocked/surprised. The drive-through is even more of a pain, because they have to take out the credit card reader machine, and show it to me. Almost makes it easier to get my fat ass out of the car and walk inside the store


My 84yo mom has been using Apple Pay since 10/2014 and she has to school the kids on the register at McDonald's all the time. She says it's not the kids, it's bad training from managers. Some McDonald's even have trouble to get the POS terminal out the window because the cord is so short.
Rating: 2 Votes

I find it strange that the US is only just introducing Chip, the U.K. has had this since 2005, and contactless payments are now the norm, pretty much 100% of the stores I visit I use Apple Pay all the time.
And Apple Pay ATM's for cash withdrawal are now available in most places.
We just have the issue with it being limited to £30 due to banks issuing contactless cards many years ago which have no security other than a spending limit.

Perhaps this might shed some additional insight:
UK’s Lessons For US Mobile Payments Adoption ('http://www.pymnts.com/nfc/2016/uk-lessons-for-us-mobile-payments-adoption/')
From article:
OK, you say, so all we need to do now is hustle up and get contactless POS terminals out there in massive force.

If it were only that easy.

In the U.S., there simply aren’t the same dynamics in play.

Two million contactless terminals today sounds like a great start — until you do the math. There are something like 13 million POS terminals across a massive geography that is the United States, not including mPOS devices.

Oh, and something like 14k financial institutions that issue those cards and countless merchant acquirers and ISOs all hawking merchants to deploy new terminals.

It’s a whole lot harder to wrangle this ecosystem to the ground given the diversity of merchants and the engrained plastic card habits honed by consumers over the last 50 or so years.
Rating: 2 Votes

avanpelt
As others have said, this seems like little more than a case study in how well the payment platforms are being marketed. It is my understanding that once you can accept any NFC-based payment, you can accept them all -- regardless of the device the customer is using. Samsung Pay is a little different since it can mimic a card swipe.
Rating: 2 Votes

As for restaurants, I really don't see them accepting it. The chip-enabled ones I've been to still take cards away from tables, making Apple Pay impossible.


Several chains allow you to swipe you card at the table... Applebees, Chili's, Olive Garden, Uno... I see no reason they couldn't go from that to taking Apple Pay.
Rating: 1 Votes

You can use ApplePay at Exxon/Mobil with their Speedpass+ app. Not quite as convenient as Apple, but at least my CC info isn't changing hands. Would be nice if other gas stations got on the bandwagon though.


Interesting... thanks for sharing. I knew other gas station apps require you to input your checking account number and they actually do direct withdraws from you (thus avoiding CC fees, but with the crazy risk that your bank account info is on their servers now.) I figured Speedpass did the same thing. Maybe I'll download it and try it out next time I fill up at an Exxon.

Arco takes Apple Pay at their pumps. Sometimes it doesn't work though, and it asks for a PIN.


Not familiar with that chain. Looked them up - they're in the Southwestern US while I'm in the Northeastern US. I actually remember seeing their convenience store (AM/PM) while in LA but the name/logo of the company is so bland, if I ever saw it, I've totally forgotten about it.
Rating: 1 Votes
[ Read All Comments ]