Apple may start production of the iPhone 8 earlier than expected, according to information gathered by BlueFin Research Partners and shared by Barron's Tech Trader Daily.

There is "some indication" from the supply chain that Apple will ramp up production of the iPhone 8 starting in June, but that doesn't necessarily point towards an earlier non-September release date. 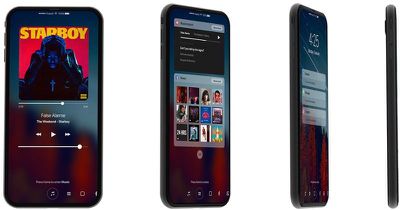 The most intriguing data points that we have uncovered suggests that AAPL is ramping the next generation iPhones earlier than historical norms, although we have no indication that there has been any change in release plans for the iPhone 8/X.[...]

Given the radical design changes expected in the iPhone 8, it is unsurprising that the company may be planning to ramp up production earlier than normal, if the information BlueFin Research has shared is accurate. An earlier production date will give Apple time to improve yield rates and work out manufacturing issues, and could potentially lead to better supply when the iPhone 8 launches in September.

Rumors suggest the iPhone 8 will include an edge-to-edge OLED display, perhaps with curved edges, with a glass backing, a deviation from the aluminum body used since the iPhone 4s. It's said to look like a single sheet of glass, with a Touch ID Home button built directly into the display.

Wireless charging in some form is expected to be included in the device, but it is not yet clear if it will be Apple Watch-style inductive charging or a longer-range over-the-air charging solution. Other rumored features include a faster, more efficient A11 processor, advanced biometrics like facial recognition or iris scanning, a new Taptic engine and 3D Touch advancements, and camera improvements.

BlueFin Research also says Apple has adjusted iPhone 7, iPhone 7 Plus, and iPhone SE production downward as it begins preparing for the launch of the iPhone 8.

Nick A
All of these iPhone 8 rumors seem too good to be true. A iPhone 7S this year just seems more likely. I really hope I'm wrong though.
Score: 26 Votes (Like | Disagree)

So the design is pretty well finalized then? They likely are expecting huge sales numbers and want to ensure adequate supply quantities for the holiday shopping season.

I just hope they didn't make design compromises to meet that goal, like they did with the new MBP's battery that was supposed to be terraced for more capacity, but those plans were shelved at the last moment due to technical reasons.

They've gone three years with the 6/6+ design so I'd hope that the design for the 8 is finalized!
Score: 6 Votes (Like | Disagree)

macs4nw
So the design is pretty well finalized then? They likely are expecting huge sales numbers and want to ensure adequate supply quantities for the holiday shopping season.

I just hope they didn't make design compromises to meet that goal, like they did with the new MBP's battery that was supposed to be terraced for more capacity, but those plans were shelved at the last moment due to technical reasons.
Score: 4 Votes (Like | Disagree)

code-m
I hope we do not have a long delay till these things ship. Sorry backlogged till early Nov 2017.
Score: 3 Votes (Like | Disagree)

Michael Scrip
Good. If they won't spin up more production capability during launch... then starting the manufacturing earlier is the next best thing.

Hopefully this will prevent people from waiting weeks or months to buy the next new iPhone.
Score: 3 Votes (Like | Disagree)
Read All Comments