Apple today seeded the first beta of an upcoming tvOS 10.2 update to developers for testing purposes, one month after releasing tvOS 10.1, the first major update to the tvOS 10 operating system. tvOS 10.2 comes a day after Apple released tvOS 10.1.1.

Designed for the fourth-generation Apple TV, the tvOS 10.2 beta can be obtained by connecting the Apple TV to a computer with a USB-C to USB-A cable, downloading and installing the software from a registered developer account via iTunes or Apple Configurator. 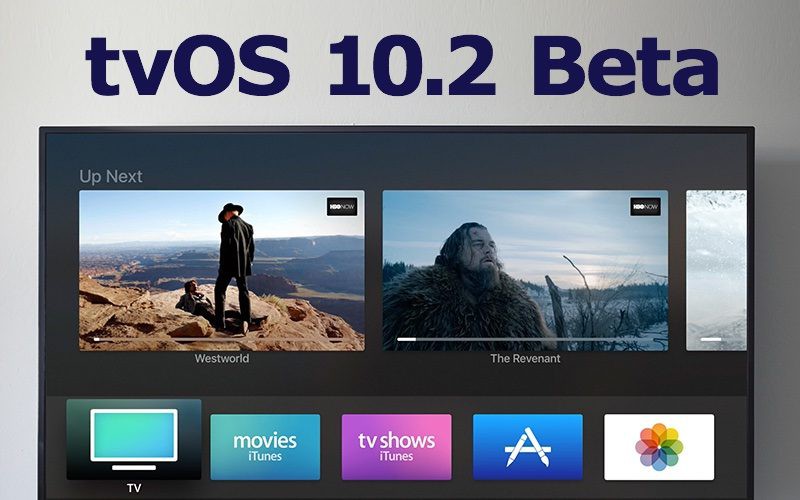 Given the tricky installation requirements, tvOS betas are limited to developers and will not be provided to the public.

We don't yet know what's included in tvOS 10.2, but as a 10.x update, it could potentially include new features and design changes above and beyond the standard bug fixes and performance improvements. We'll update this post should any new features be discovered in the tvOS 10.2 update.

According to Apple's release notes, there's an accelerated scrolling option that allows users to scroll through content much more quickly, as described below:

Scroll views with a lot of content now have a behavior that allows users to scroll through them much more quickly. Several large swipes of the Siri remote will automatically switch into this mode. Additionally, users can swipe on the far right side of the remote to navigate specific indexes. If you see any unexpected behavior in your applications from this feature, please file a bug.

To add to this, I would love the option to stream audio from one source while viewing video from another source. Or, to mix the two audio streams together. E.g., listening to Pandora while watching a baseball game.

liberte1776
Apple needs to get on board with h.265 support and 4K/HDR soon, hope this is the year for a new ATV which supports these features. ATSC 3.0 support is also high on my list!
Score: 5 Votes (Like | Disagree)

noraa
My biggest request would be a picture-in-picture mode similar to what's on iPhone/iPad and even the Mac.
Score: 4 Votes (Like | Disagree)

On Apple TV it would essentially be a way to keep a video playing....while looking for another video to play. Not a totally useless feature, but with such a singular purpose its definitely far down the list of priorities.

I think there is great opportunity to mix non-video apps with video apps if there was PiP. This is particularly useful with sports or music videos, where you don't really need undivided attention to the video.

Indeed, the fact that a video wouldn't necessarily pull you away from a non-video app might encourage more non-video apps to develop for the ATV.
Score: 3 Votes (Like | Disagree)

My biggest request would be a picture-in-picture mode similar to what's on iPhone/iPad and even the Mac.

To add to this, I would love the option to stream audio from one source while viewing video from another source. Or, to mix the two audio streams together. E.g., listening to Pandora while watching a baseball game.
Score: 3 Votes (Like | Disagree)

Not necessarily. I would love PiP similar to what TV's have had for decades. Would love the ability to watch two games at the same time across apps (i.e. ESPN and Watch TNT) or quickly switch between streams/apps when a commercial hits.

This one may be harder, but I've found selecting via multi task menu to be slow, as the app you are switching to needs to re-buffer.

I hear Apple offers a $149 add-on for PIP with compatible television sets. You just plug the add-on into HDMI2 and use the PIP on the TV to control PIP location/size/contents. Works great!

Or, if you are budget-conscious, $5 of double-sided tape can affix an iPad mini to the bottom corner of your TV set so you can see two things (mostly) at once. Not quite as easy to configure where the inset picture goes though.

Sorry, completely facetious, and I feel your pain. It's just that I've had PIP features on television sets since something like 1991 and after the initial novelty have never seen a use for it. Today, if I want to multitask I have several second screens (iPad, iPhone, computers...) to choose from and would rather do that than lose a corner of the main thing on the screen I am (and others in the room are) trying to watch. I think there are a number of features seen as higher priority in the Apple TV dev team than PIP.
Score: 2 Votes (Like | Disagree)
Read All Comments