For all of its devices that use communications technologies like Bluetooth, Wi-Fi, and NFC, Apple has to submit them to the United States Federal Communications Commission for approval, and the filings, though restricted, occasionally give hints as to what Apple is working on.

The A1846 model number is not similar to existing Apple products, unveiling no information. There are no photos of the device itself, but a regulatory label that was on the original A1844 device pictured pointed towards slightly curved edges and two included torx screws. Apple appears to have updated the imagery in the second A1846 submission to give fewer hints on its design. 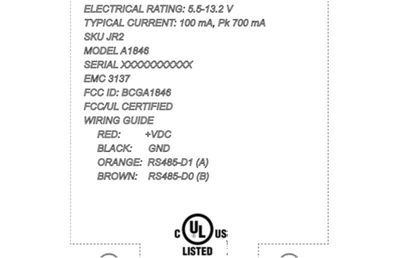 When the original "Wireless Device" was uncovered, there was some speculation that it could perhaps be a new Apple TV, but given the design of the product and the prominent FCC labeling, it's much more likely that this is a behind-the-scenes object that will not see a public release.

Regulatory information is etched directly on the back plate of the device along with a wiring guide, details that are not included on consumer-facing products.

It's possible that the device in question is something that's used in retail Apple stores, such as a product display unit or iBeacon-based equipment used to communicate with customer iOS devices.

Given Apple's secrecy and its request for the FCC to keep all images, descriptions, diagrams, and antenna locations for the device hidden from the public, we won't know more about the device until it's released, and if it is indeed a non-consumer-facing product as we suspect, we may never figure out what it is.

I used to be a hardcore fanboy excited for and by Apple, but Tim Cook's tenure has slowly murdered that part of me.
Score: 21 Votes (Like | Disagree)

"doubling down on secrecy"

For all of its devices that use communications technologies like Bluetooth, Wi-Fi, and NFC, Apple has to submit them to the United States Federal Communications Commission for approval, and the filings, though restricted, occasionally give hints as to what Apple is working on.

Deuce on the Clock
Apple wireless products were the best. Sad they discontinued them. Hopefully they're making an all in one hub that includes AppleTV as well.
Score: 7 Votes (Like | Disagree)

Long distance charger was my first thought, but such a thing would use a lot more power. So now I think it is an Alexa type of device, which I think would be cool.

Giving me another device to use with Siri wouldn't be useful for me. I can already access Siri on five devices in my home -- two of which are almost always either on my person (watch) or nearby (phone). For me, the problem with Siri is not accessibility. The problem with Siri is that she's an idiot in her current form.
Score: 7 Votes (Like | Disagree)

proximity
New keyboard for the iMac with a touchbar. Hence the bigger battery.
Score: 5 Votes (Like | Disagree)
Read All Comments