Earlier this week, we spotted an Apple filing for a nondescript "wireless device" pass through the FCC ID database. Apple characteristically requested permanent confidentiality for most of the documents in the filing, including photos, user manuals, and schematics, so the entry largely remains a mystery.

What we do know is the device has a model number of A1844, which does not line up with any existing Apple products. A regulatory label shows the device has two Torx screws on the back plate of the device, which appears to have at least two slightly curved edges. The device has an electrical rating of 5.5V to 13.2V. 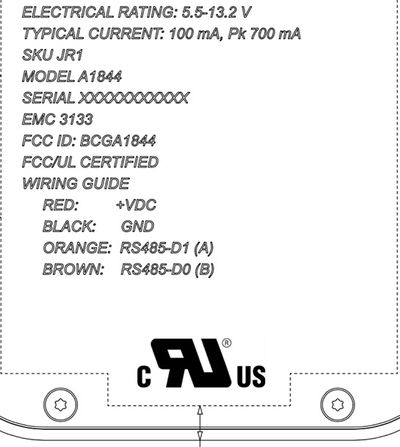 Test reports completed by UL Verification Services also reveal the wireless device has Bluetooth and NFC, although Wi-Fi is not mentioned.

Some websites have speculated the filing could represent a new Apple TV, but the device appears to be smaller based on the artwork -- although there are no exact measurements for scale. The device also has oddly specific regulatory text etched directly on the back of the device, including a wiring guide, which would be uncharacteristic of Apple to include on the exterior of a consumer-facing product.

Perhaps, then, the wireless device is for internal use. Back in 2014, an FCC filing revealed Apple's first-party iBeacon hardware, for example, which the company uses in its retail stores. Originally introduced at WWDC 2013, iBeacon technology enables iOS devices to communicate with transmitters via Bluetooth LE in order to deliver relevant information to apps and services when a user is nearby.

Without any supplemental information, the FCC filing will likely remain a mystery. At this point, virtually any wild speculation is fair game, ranging from a new AirPort Extreme to Apple's widely rumored Siri-enabled speaker for smart homes, although the latter product is reportedly still being prototyped.

mike...
It's a thermostat. Apple will launch a load of IoT devices (compatible with HomeKit, of course) around this time next year.
Score: 17 Votes (Like | Disagree)

mike...
Lots of thermostats use RS485 control signals. I'm telling you all, it's a thermostat.
Score: 17 Votes (Like | Disagree)

Rocketman
I hope it is a POS device to rapidly expand NFC usage to millions of small retailers.

You mean they're making a Sega Dolphin-like device?

J/K, it's Friday.
Score: 8 Votes (Like | Disagree)
Read All Comments

Sunday October 2, 2022 6:41 am PDT by Joe Rossignol
Apple is developing new iPad Pro, Mac, and Apple TV models, and at least some of these products will be released in October, according to Bloomberg's Mark Gurman. However, Gurman continues to believe that Apple is unlikely to hold an event this month. In the latest edition of his Power On newsletter, Gurman said "the big iPhone 14 unveiling last month was probably it for Apple in 2022 in...
Read Full Article • 149 comments