A 10.5-Inch iPad Pro Could Match the 12.9-Inch Model's Resolution and the iPad Mini's Pixel Density

Apple is rumored to be working on a new iPad Pro that adopts an edge-to-edge display, and while it's said to be somewhere around 10 inches, there are a lot of mixed rumors about the specific size of the tablet.

Studio Neat designer Dan Provost yesterday wrote a post on Medium (via Daring Fireball) making the case for a 10.5-inch iPad. His math is solid and his argument makes sense, framing all of the iPad Pro rumors in a new light. 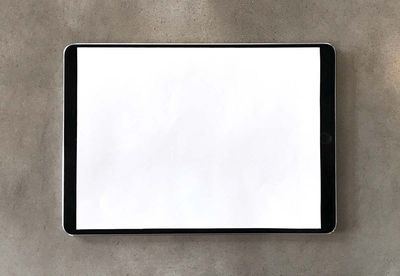 
The math works out perfectly. This new 10.5" iPad would have the exact same resolution as the 12.9" iPad Pro (2732 x 2048), but the same pixel density of the iPad mini (326 ppi instead of 264 ppi). Crunch the numbers, do a little Pythagorean Theorem, and you end up with a screen 10.5" diagonal (10.47" to be precise, but none of Apple's stated screen sizes are exact). In terms of physcial dimensions, the width of this 10.5" screen would be exactly the same as the height of the iPad mini screen.

Existing rumors all agree that the upcoming iPad Pro will be in the neighborhood of 10 inches, but we've heard everything from 10.1 inches to 10.9 inches, suggesting Apple could be testing multiple prototypes.

KGI Securities analyst Ming-Chi Kuo originally suggested the tablet would be 10.5 inches, but recently revised his statement to say that it could be anywhere from 10 inches to 10.5 inches.

Japanese site Mac Otakara has released two separate reports, one mentioning a 10.1-inch tablet and the other suggesting the display will measure in at 10.9 inches, while rumors from the Taiwanese supply chain suggest a 10.5-inch display.

While we can't yet say for certain the iPad Pro will feature a 10.5-inch display, it's the size that makes the most sense and fits well into Apple's lineup.

The upcoming iPad Pro is said to be a new flagship model that will be sold alongside the 12.9-inch iPad Pro. It's said to feature an edge-to-edge display with no Home button and a small top bezel.

Jsameds
If this is correct it's a day one purchase for me.
Score: 14 Votes (Like | Disagree)

amcomis
Guessing this will include a price increase
Score: 13 Votes (Like | Disagree)

If people are confused by 4 sizes of iPads, then I would suggest they (those people you're referencing) invest in coloring books. The rest of us will be okay. Let's not confuse Apple offering "confusing" (they aren't confusing btw) sizes with customers being confused by what Apple offers. They aren't the same thing. The buying public has been able to differentiate product choices forever. If they can pick a TV from the 298,457,125,786 size/resolution/smart capabilities on offer, they can choose an iPad. We're talking about commodity consumption devices, not DNA sequencers.:D

I think there's quite a point to see confusion in the lineup.
Score: 13 Votes (Like | Disagree)

If people are confused by 4 sizes of iPads, then I would suggest they (those people you're referencing) invest in coloring books. The rest of us will be okay. Let's not confuse Apple offering "confusing" (they aren't confusing btw) sizes with customers being confused by what Apple offers. They aren't the same thing. The buying public has been able to differentiate product choices forever. If they can pick a TV from the 298,457,125,786 size/resolution/smart capabilities on offer, they can choose an iPad. We're talking about commodity consumption devices, not DNA sequencers.:D
Score: 11 Votes (Like | Disagree)

This makes me angry beyond belief

Newsflash: There's always a new and better model coming within a year.
Score: 10 Votes (Like | Disagree)

Jack Delgado
That screen-to-bezel ratio is tasty in the picture. Let's pair that sucker with some real OS capabilities.
Score: 8 Votes (Like | Disagree)
Read All Comments