A couple days ago Sonny Dickson shared a look at one of two early prototypes for the original iPhone, the iPod Click Wheel-based OS that iPod "Godfather" Tony Fadell was working on. Tonight, Dickson has shared a video pitting Fadell's version against Scott Forstall's icon-based iPhone prototype, which went on to become the basis for iOS.

Both P1 and P2 run a prototype OS Apple codenamed "Acorn OS" internally, though Dickson notes that P1 runs faster because it uses a slimmed down version of Acorn OS. Each prototype also sports a unique logo that pops up after the Acorn OS logo while it boots up.

The P2 loads octopus whereas the P1 has the iPod classic logo. The P2 takes a significantly longer to load because it actually has a real OS, whereas the P1 takes much less time since the OS is slimmer. These P unit prototypes are so early in the development process that they rely on a custom process to be turned off, and can only be powered down during a certain step of the boot process.

The video, and accompanying photos, provide both a look at the choice Steve Jobs and Apple employees faced as they were developing the iPhone and iOS 10 years ago and how Apple explores ideas. As Dickson notes, "P devices" are the first step of any project at Apple. They're barely-functioning devices that allow the company to explore and test concepts, iterating on them until they're satisfied enough to push the project further. 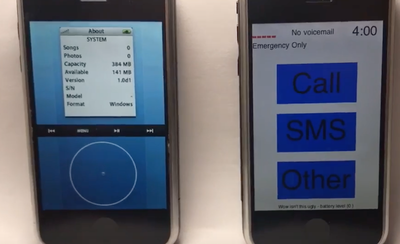 More images of the P2 iPhone prototype are available on Sonny Dickson's website.

Like you know them so well eh? Forstall was a motor mouth who thought he was as important as Jobs or Ives. One can see his arrogance during his presentations. This is based purely on his stage presence, I don't think anyone here can say what he was like behind the public eye, but I reckon he was a royal pain in the ass.

For the record, Forstall was more important than Ives. Ives developed industrial design cases that met Steve's ideals. He didn't introduce cases and Steve went, ``that's perfect!'' No, there is an entire building full of failed Ive designs. Steve found a `kindred' spirit industrial designer who could produce what he envisioned, not the other way around. Scott was one of the key architects on Openstep.

Yes, he is brash, but he's also amenable when put in his place. I know. I had my brush ups with him. He was used to wearing 7 hats doing his job. We all were at NeXT. When we merged with Apple we couldn't believe how little the average person did at Apple and still bitched it was too much work. That changed rapidly.

Being a NeXT employee had many perks in so we never were interrogated by Steve when he came back and let go if found our position was redundant. That was the Apple legacy crowd, including Blue Box/Red Box cruft, to the 26 marketing departments he whittled down to 1. Yes, there were individual marketing groups for each product made at Apple. There was also 180 internal applications and the IT Budget was asininely off the charts for people getting paid to make these asinine pet software projects that were never intended to be made into actual consumer products.

In short, NeXT folks saved Apple's bacon and it pissed off a lot of legacy who felt threatened. Steve cancelling the paid 12 week Sabbatical option saw a lot of them venting and he offered them the door. OS 9 was a stop-gap Tevanian oversaw to get out the door while OS X was still in development; and wouldn't be nearly viable for a few more years. The amount of cruft at Apple was insane. Lots of resources were leveraged to actually implement streamlined software development practices as no one at Apple had any worth while UNIX experience. So, the iMac became the center piece to pacify the masses, and the iPod was the lucky grand slam that gave Fadell fame for suggesting it but took Jon Rubinstein and his seasoned experience in hardware at NeXT and HP to pull it off.

Losing Rubinstein, Tevanian, Serlet and more takes a toll on any corporation the size of Apple. The replacements aren't on their level.Sina Tamaddon was also vital in ways none of you know.

The only person able to convince all of them to stay on-board and rebuild Apple was Steve. If he had only remained a technical advisor to Amelio the company would have folded in 6 months.

Steve saw something in people so far outside the IT world, brought them in and they became huge points of presence that no one else could have foreseen becoming. Sina was but one example of it. He did that quite frequently at NeXT. He also had a close knit group of luminaries in SV that he drew upon throughout his life which gave him even more insight into building a company.

Tim isn't a local SV product. It shows in his Compaq Southern personality. He's a behind the scenes man who Steve handpicked because he wouldn't sink the ship. Apple will eventually have to find someone who has vision that adheres to the founding principles of its original founder. But that's not now. They are working on the flag ship campus, Project Titan and so much more, but by all means paint Forstall as if you ever worked around him.

The guy is brilliant and well earned his position. Does he have an ego? Hell yes. Did he dwarf Fadell in talent? Hell yes. Tim Cook is not and never will be Steven P. Jobs. He has a more passive aggressive demeanor and doesn't like people to rock the boat: the exact opposite of Steve who demanded a spine and if you could deliver on your boasts you were well rewarded.

Apple is a global company trying to be all things to all cultures, something Tim has worked very hard at achieving.

Let's see what 2017 has now that the flag ship campus will soon be done and no longer preoccupying keep personnel's attention.
Score: 53 Votes (Like | Disagree)

ILuvEggplant
The iPhone has lost its soul.

emm386
Scott Forstall is excatly the kind of person that, Apple would need right now.
Strong personality, clear words and probably the only high-ranking Apple exec with a sense for reality.

That doesn't mean I ignore his shortcomings and the mistakes he made.
But as it looks now, they are definetly the lesser evil.
Score: 27 Votes (Like | Disagree)

Negan Lannister
Steve picking Scott's design was the right choice. Having a scroll wheel taking up half a screen would make no sense when we can just scroll up and down to navigate. So what does Apple do to reward the father of iOS and a Stanford alumni who actually knew more about code than Jobs did? Relieve him five years later after Steve passed away and make the underdeveloped Apple Maps as the scapegoat because Jony hated working with him.

Skeuomorphic was better looking to me than Jony's flat look. Apple lost two strong personalities within a year for the sake of a weaker and petty one where he looks like he is ready to cry in every product intro. No wonder Apple became fat cats. Nobody like Steve and Scott at Apple to be a strong driving force and light a match under their ***!
Score: 25 Votes (Like | Disagree)

Or are you clueless why Forstalls departure occurred? Of course Apple never confirmed specifics, but allegedly he wasn't just terminated because of Cooks doing. Forstall botched Apple maps and Siri was over hyped during his reign....

Bulls**t. Forstall was the fall guy for Maps. He was Job's guy, didn't mesh with King Ive & was conveniently shown the door when he rightly refused to sign the apology letter. Apple Maps was a disaster from the get-go and was rushed onto the iPhone before it was even CLOSE to a golden-master. His replacement Cue even said as much saying that Apple "had completely underestimated the product, the complexity of it." This falls on Cook as the CEO. He approved & rushed an incomplete product out the door and when he was caught with egg on his face, rather than accepting the blame as he should have, he foisted it off to those beneath him and summarily dismissed them.

And let's not even get started on the Maps 2.0 that is Siri.
Score: 20 Votes (Like | Disagree)
Read All Comments