An early prototype of the original iPhone has been shared online by Sonny Dickson, with a collection of images and a video that provide a glimpse into one version of the iPhone that Apple created and tested before ending up with the first iteration of the device. The prototype includes some similar features to the first generation iPhone, like an aluminium chassis, multi-touch compatible screen, 2G connectivity and Wi-Fi, but its entire user interface is taken directly from the click wheel system of Apple's original iPod line.

Called "Acorn OS," the prototype software includes an on-screen click wheel on the bottom half of the screen and a menu system on the top half, and the two are bisected by a bar with rewind, menu, play/pause, and fast-forward buttons. On the menu are options such as “Favorites”, “SMS”, “Music”, “Settings” and “Recents," and it's navigated by circling around the click wheel to go up and down, with a center press confirming an action, just like on the iPod. 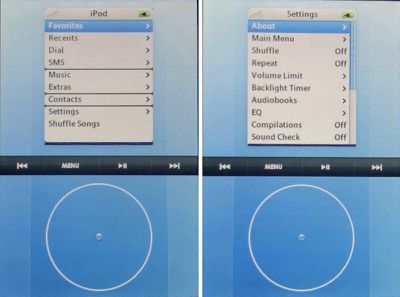 Instead of the modern touch-driven interface we now call iOS, it featured an operating system dubbed “Acorn OS” (this was an internal code name, and it unclear if it would have kept that name if it had been released), which is derived from the acorn shown on boot.

Not much else is known about the device, apart from the fact that it differs heavily from the iPhone we know today, and that very few units running “Acorn OS” exist, with most of them likely being destroyed by Apple, a company in which there is a specific job role in relation to the destruction of prototypes.

Dickson references Apple's patent for a "multi-functional hand-held device," filed and published in 2006, as proof that such a prototype did exist at one point and could potentially have been an alternate version of the iPhone. In one of the patent's drawings, a click wheel can be seen as a possible input method for the proposed device. The patent's abstract describes a product with "at most only a few physical buttons, keys, or switches so that its display size can be substantially increased."


It's well known that to get to the current version of iOS we have today, Steve Jobs originally placed "iPod Father" Tony Fadell and Macintosh executive Scott Forstall in a head-to-head competition to come up with the best mobile operating system possible. The two teams represented a clashing idea that Jobs had for the iPhone: enlarge the iPod's OS or come up with a compact version of the Mac's OS. Forstall's team won, and it appears that today's shared prototype is a bygone leftover of the losing side's work.

Check out more images of the iPod-inspired iPhone on Sonny Dickson's website.

yossi
If Tim Cook had been in charge back then, we would be on aCorn OS 9.1 by now.
Score: 47 Votes (Like | Disagree)

yesjam
It's a real testament to Scott Forstall's design that this seems so...clunky and that the iOS design seems so inevitable. Although Forstall gets a lot of hate for his penchant for skeuomorphism, it's clear from this video alone that he is one of the most important GUI designers in the history of computing.
Score: 44 Votes (Like | Disagree)

Sema
And here is the exclusive picture of the actual device itself:

TechGeek76
Where is this pic of this iPhone? This is just the software interface...

And the TITLE of the link you provided?

EXCLUSIVE VIDEO AND PHOTOS: THE IPOD-BASED INTERFACE THAT LOST OUT TO IOS FOR THE IPHONE

There are no pics of the phone itself...

Where is this pic of this iPhone? This is just the software interface...

The UI shown in the video was probably displayed on just a touchscreen attached to development boards. Something like the mostly off-the-shelf tablet development system that was used in 2005 to demo the multi-touch beginnings of the iOS GUI:

Case designs were done separately, since no hardware could fit them (yet).

With the first iPhone being launched in 2007 and 3 years in the making that must have been approx 2004 (I'd guess even before) and one of the very first prototypes from apples "Project Purple" amazing what apple achieved in those 3 years.

It was even quicker than that, unless we count just talking and thinking about it.

Although Jobs talked with Cingular about doing a phone in early 2005, Apple didn't get serious about development until mid 2005, coincidentally around the time Google bought Android. That's when they started making the iPod based version. (It's also when Apple approached Verizon, with absolutely nothing to show them except a vague idea and some odd marketing ideas. Verizon politely turned them down. Even Cingular didn't sign on for another year.)

The competition between the iPod clickwheel and the OSX touch based version came later in 2005, with the decision taking place near the end of the year. Project Purple 2 ramp up and the development of iOS started at the beginning of 2006.

It was not until mid-2006, about six months later, that Cingular (AT&T) finally signed a contract for the iPhone. They got a multi-year exclusive, partly in return for delaying the carrier's 3G build out, to instead beef up the speed of their 2G EDGE network for the iPhone. (By then most other smartphones had 3G.)

Also in mid 2006, Jobs invited Google's Schmidt onto the Apple board, no doubt partly because he wanted to pull Schmidt away from supporting the Android effort, and partly because Apple needed Google's services.

With Schmidt's help, Apple and Google engineers secretly met over Halloween 2006 to hammer out new APIs so the iPhone could display Google search, maps, etc. (Later, the GPS-less iPhone added Google's 2G/WiFi locating service, and YouTube videos were converted so the iPhone could play them. Jobs' first demo would've been a lot less impressive without Google services.) The Apple engineers were shocked that the Google engineers showed up in costume, btw :)

By Thanksgiving 2006, iPhone prototypes were still very unstable and at one meeting Jobs softly told his staff that they had no product yet. His unusually quiet tone frightened everyone far more than his regular yelling, and they redoubled their efforts. By mid December they were able to show the Cingular CEO a semi-working model. Here's the hardware test version of iOS from November 2006:

Even though the iPhone still would not be solid enough to produce and sell until mid 2007, Jobs knew that other companies were also working on capacitive touch phones. If he wanted to guarantee credit for being first, he had no choice but to do a public demo before the big mobile phone show in Barcelona that was coming in February 2007.

So, armed with a dozen iPhone prototypes, each able to run just long enough to show one demo section, he cast aside his normal rule of total Apple secrecy and revealed the device in January 2007. (Luckily, competing development was further behind time wise than expected.)

As an aside, knowing that the below 2005 iPod-phone patent application would sooner or later be noticed, Jobs smartly made sure he was the first to mock it during his demo with that rotary dial iPod photo :D