Foxconn is deploying a plan broken down into three phases that will eventually "automate entire factories" in China (via DigiTimes). According to the general manager of Foxconn's Automation Technology Development Committee, Dai Jia-peng, the company's first phase of the plan is "to set up individual automated work stations for work that workers are unwilling to do or is dangerous."

The second phase will see entire production lines automated along with a decrease of the number of robots used by the manufacturer. This will lead into the third phase, which is aimed to be fully automated factories "with only a minimal number" of human workers. 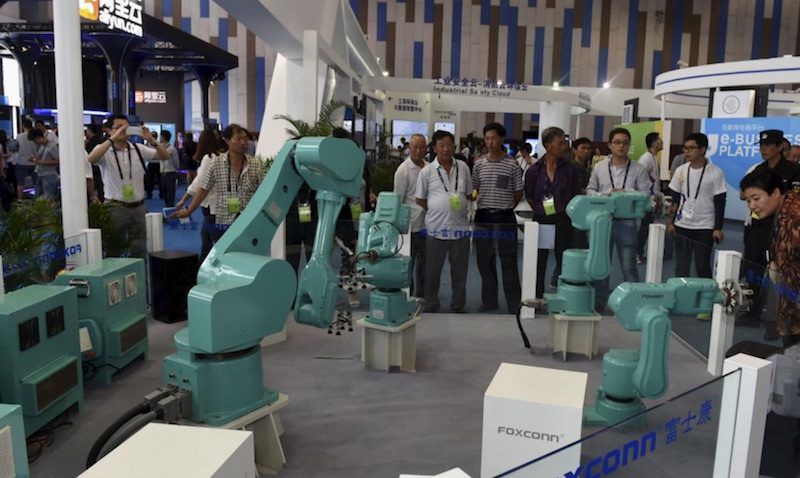 In the third phase, entire factories will be automated with only a minimal number of workers assigned for production, logistics, testing and inspection processes, Dai indicated.

Currently, factories in Chengdu, Shenzhen, and Zhengzhou have been brought to the second and even third phase, with as many as 10 "lights-out," or fully automated, production lines at some of the locations. One of these facilities is located in Chengdu, where all-in-one PCs are being manufactured on automated assembly lines.

Foxconn's lines are deployed with "Foxbots," which it develops and produces in house at a rate of around 10,000 each year. Besides technology manufacturing, the company is also said to be creating robots for use in medical care as well. Human workers are still integral to the process, according to Dai, "because humans have the flexibility to quickly switch from one task to another."

Yesterday, an article by The New York Times looked more deeply behind the scenes of Foxconn and its major iPhone manufacturing plant in Zhengzhou, China. The "iPhone City" has become one of Apple's major global manufacturing plants over the past decade, and is one of the spots where Foxconn is now looking to deploy its three-phase automation plan.

If only this would lower the prices... :)

Customers should expect a drop of at least 65% off the current iPhone, iPad and other device pricing.

The robots are replacing a human workforce because it is cheaper to replace humans with robots. There is no other reason. Naturally, everyone, all Apple customers, should expect a huge drop in the cost to buy iPhone.

I suspect iDevices will cost ~80% less than today.

The manufacturing costs are only a very tiny piece of the iprice. Nothing will happen to your wallet.
Rating: 8 Votes

I agree with your predictions but I see this as positive innovation. Somewhat ironic that you seem to share fear and mistrust of technological advances with "all the yokel rubes."


I do appreciate the technological innovations but at some point business efficiency effectively cannibalize their very customers. It's a virtuous circle as Jobs used to say. This constant drumbeat of cost savings in the end amounts to "F you, I got mine." Walmart didn't get to be Walmart without the average person thinking they could get cheap products and everyone else pick up the tab.
My eyes are wide open to reality. I find irony in all the rubes who want factory jobs to come back, that they think it will magically happen without big government regulation (which they loathe so much), unionized worker protection which has been demonized and dismantled, or without consumer sentiment changing and not demand ever-cheaper goods. The consumer must also put up or shut up, for meaningful change.
Rating: 8 Votes

Really? Manufacturing is a huge cost. With the threat of onshoring to the USA, robots aim to mitigate that cost.

Foxconn, for the most part, is an assembly company. Assembly is a small piece of the overall cost of the phone.

Also, no one in their right mind should think that lower costs of production on a device like an iPhone is going to result in lower prices. That's not how high margin multinational companies operate, they pocket the difference and buy back stock to inflate the executive teams pay.
Rating: 7 Votes

ripfrankwhite
If only this would lower the prices... :)
Rating: 5 Votes

512ke
Trump will force all iPhones to be built by American robots thereby securing the robot vote in 2020.
Rating: 5 Votes

I'm no expert - but I understood the whole reason Foxconn et al. exist in their current state is because the labour in China is so cheap I that it makes financial sense to manufacture there. But if the bulk of the labour expense is taken out of the equation what's the benefit of having the manufacturing in China anyway? Why not build the automated factories in the US?


There are a lot of reasons.

Chinese infrastructure is vastly superior to the US'... I'm talking ports, railway, etc. They've invested heavily in this. No other country compares really.

Materials are cheaper there, due in part to the lack of environmental regulations (those that exist are rarely enforced). Many of apples products use aluminum, which China produces more than 50% of the worlds supply. Factor in rare earth metals, which China pretty much has a monopoly on... you see where I'm going with this.

Almost all electronic parts are made there, or in that general area, which saves a ton on shipping. Manufacturing an iPhone in the US would require that all those parts be made in the US, or ship them from abroad ($$$).

In addition to low wages, Chinese workers have no rights and few benefits, which not only makes running factories cheaper, it makes their factories highly customizable (ie you can lay off workers at need, etc). Unions are illegal. They aren't entitled to vacations, sick leave, etc. There's no employment insurance to pay or disability benefits to pay, etc. Coupled with this is an ample supply of both skilled and unskilled workers.

The government is very pro manufacturing. Meaning that (usually with a small bribe of course) you can build a shop with very minimal pushback. Coupled with the lack of environmental regulation (think of waste dumping)... makes for a lot of convenience... and savings.

There are more I'm probably not thinking about..

Essentially, unless Americans want to sacrifice their environmental laws, invest trillions in infrastructure and force everyone to make electronic components in the USA (which would take a long time), it's not going to happen. It's definitely not going to happen while paying its workers a living wage.
Rating: 5 Votes

RC Mike
None of you are nervous about this? It'll forment the next Chinese revolution. They aren't set up for a service-based economy. Bad juju here. Something to watch for.
Rating: 4 Votes

dontwalkhand
Ladies and gentlemen: a preview of US built iPhones. Zero jobs gained. Possibly one, a manager.
Rating: 4 Votes

Customers should expect a drop of at least 65% off the current iPhone, iPad and other device pricing.

The robots are replacing a human workforce because it is cheaper to replace humans with robots. There is no other reason. Naturally, everyone, all Apple customers, should expect a huge drop in the cost to buy iPhone.

There are other reasons as well. As the technology advances the quality of products created on fully automated lines will be greater than that of human workers. You'll have much higher consistency of results. Ever heard the colloquialism "Never buy a car built on a Monday"?
Rating: 3 Votes
[ Read All Comments ]