Following a reveal during the "Hello Again" event in October, Mojang has now announced that Minecraft will officially launch today for the fourth-generation Apple TV. The exploration and crafting game is said to be "rolling out in all regions" throughout the day. 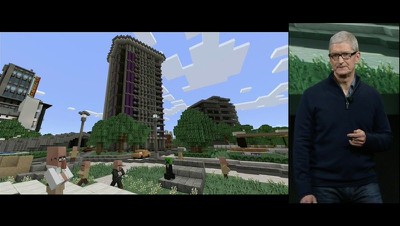 Minecraft for Apple TV will also come with seven pieces of DLC, including Holiday 2015, Town Folk, and City Folk skin packs, along with other add-ons "for a limited time." Otherwise, the game is similar to every other version of Minecraft, tasking users with venturing into a randomly generated world and customizing it to their liking.

We’ve just released Minecraft for the slim black boxes. And, for a limited time, it comes with seven pieces of lovely DLC, giving you the chance to customise the fun to your liking. Minecraft: Apple TV Edition currently includes the Holiday 2015, Town Folk, and City Folk skin packs, along with the Plastic, Natural, Cartoon, and Festive 2016 mash-ups. It costs $19.99 and is rolling out in all regions as I type.

The Apple TV version will also be up to date with the all-new Ender Update that Minecraft just launched. For those interested, Minecraft for Apple TV will cost $19.99.

Isn't that what it costs on all platforms?
Score: 9 Votes (Like | Disagree)

foxconn
When I was a kid we wanted the best graphics, now kids want the worst graphics.
Score: 7 Votes (Like | Disagree)

Bnotorious
Wow. Own on iOS devices. Should be free if purchased on iOS already.
Score: 6 Votes (Like | Disagree)