During its "Hello Again" event today Apple revealed that the popular crafting video game Minecraft is heading to the fourth-generation Apple TV sometime by the end of 2016.

During the presentation, Apple CEO Tim Cook said that users will even be able to play with friends who are on an iPhone or iPad. "You can build new worlds on your Apple TV, and play with your friends using iPhones and iPads."

I come to MR for an update and this is the first headline news I see???!

Not just somebody, but Microsoft!! Microsoft owns Minecraft!
ALSO, Apple is pretty late to the party. Most people already have it on one of 6 other platforms. Not buying again
Score: 2 Votes (Like | Disagree)

I am almost embarrassed pointing out your absolute failure but it's fun, this is a thread about Minecraft coming to APPLE TV, so even someone with a first grade reading comprehension would understand the discussion was about Minecraft comming APPLE TV. Just stay down, it's embarrassing to watch you fail and struggle, but we both know you'l respond and dig an even deeper hole.

I'm almost embarrassed you have an account dedicated to trolling and you're absolutely terrible at it. Perhaps the worst ever. You keep needing to explain yourself yet your posts don't say what you're explaining. You literally said "Apple". Apple has had it since day 1 across all of their available platforms... for 5 years now. I've already told you this and explained the differences in detail. You attempted to spin it to make yourself not appear to be a halfwit, and failed again - as the only "TV" device they have capable of playing video games hasn't been out for 4 years. The only one having difficulty comprehending anything here - is you - and you wrote your original, incorrect, statement.

So take the advice I already provided. Quit while you're behind. If you need to explain and have a second, third, fourth and fifth try at your troll attempt, you failed at trolling miserably.
Score: 1 Votes (Like | Disagree)


During its "Hello Again" event today Apple revealed that the popular crafting video game Minecraft is heading to the fourth-generation Apple TV sometime by the end of 2016. 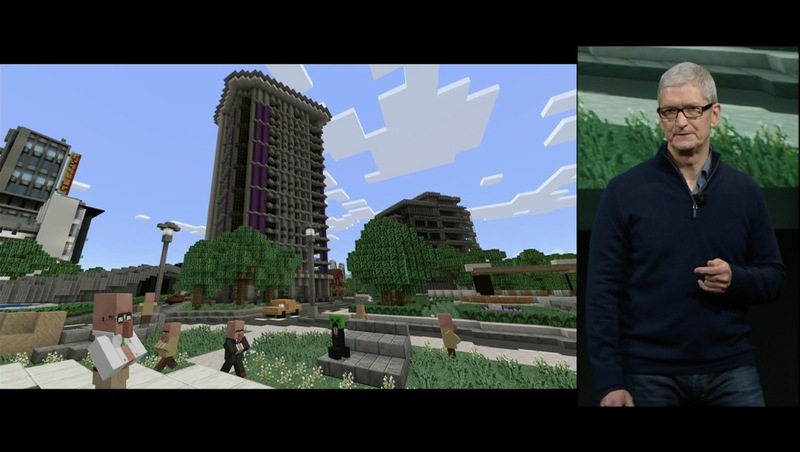 During the presentation, Apple CEO Tim Cook said that users will even be able to play with friends who are on an iPhone or iPad. "You can build new worlds on your Apple TV, and play with your friends using iPhones and iPads."

[doublepost=1477589001][/doublepost]This event is so painful to watch. It seems like every presenter (including Tim Cook) is artificially trying to be excited for features which should have been implemented years ago. His favorite words? "Incredible", "Amazing". Wonder if there's anyone keeping track of the number of times those words are spoken.
Score: 1 Votes (Like | Disagree)

Not just somebody, but Microsoft!! Microsoft owns Minecraft!
ALSO, Apple is pretty late to the party. Most people already have it on one of 6 other platforms. Not buying again

I come to MR for an update and this is the first headline news I see???!

They are always showcasing someone else's gaming software, they don't make their own.
Score: 1 Votes (Like | Disagree)
Read All Comments

Friday February 26, 2021 3:35 am PST by Tim Hardwick
Microsoft co-founder Bill Gates this week participated in his first meeting on Clubhouse, the increasingly popular invite-only conversation app, where he fielded a range of questions as part of an ongoing book tour. Gates was interviewed by journalist Andrew Ross Sorkin, and given that the Clubhouse app is currently only available on iOS, naturally one of the questions that came up was...
Read Full Article • 296 comments

Saturday February 27, 2021 7:05 am PST by Juli Clover
HomeKit was slow to take off after its 2014 launch, but now that it's been around for seven years, there are hundreds of HomeKit products available, ranging from doorbells and speakers to TVs, lights, and cameras. In our latest YouTube video, we rounded up some of our favorite HomeKit products that we find most useful. Subscribe to the MacRumors YouTube channel for more videos. HomePod...
Read Full Article • 109 comments

Tuesday February 23, 2021 7:07 am PST by Hartley Charlton
Over the past week, some M1 Mac users have been reporting alarming SSD health readings, suggesting that these devices are writing extraordinary amounts of data to their drives (via iMore). Across Twitter and the MacRumors forums, users are reporting that M1 Macs are experiencing extremely high drive writes over a short space of time. In what appear to be the most severe cases, M1 Macs are sai...
Read Full Article • 700 comments