What the changelog did not mention is that Apple also removed the "time remaining" battery life indicator following an increasing number of battery life complaints, likewise among new MacBook Pro users. 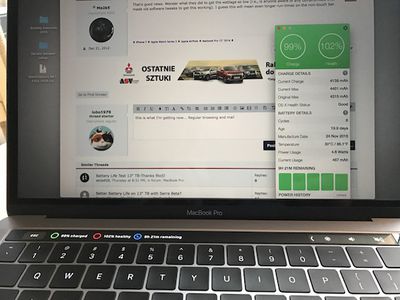 Many of the users using battery apps like coconutBattery have noticed their new MacBook Pro's battery is discharging with lower wattage, and if accurate, the lower power consumption would certainly lead to longer battery life.

Ok it is official. macOS Sierra 10.12.2 fixed my battery. I am up back to 9-10 hours of regular use. Before updating, idle power consumption was not going lower than 6 watts. On macOS Sierra 10.12.2, it is now <4 watts at 60% brightness with the ambient light sensor on.

Before the update was getting 7-9 hours with 50-60% brightness. Now getting >10 hours with 70-75% brightness with the same workload (Wi-Fi and Bluetooth on of course).

At least a dozen other users have reported similar results since yesterday after upgrading to macOS 10.12.2. Since publishing this article, a number of Reddit users have also confirmed seeing longer battery life.

While the user reports are worth acknowledging, they remain anecdotal and reflect only a small subset of new MacBook Pro users. It remains to be seen if Apple actually made battery life optimizations in the latest macOS Sierra update; if it did, however, Apple could be choosing to do so quietly as to not confirm that battery life issues were actually a problem for some users.

Apple officially says the new MacBook Pro is rated for up to 10 hours of battery life. Specifically, its tech specs page says all new 13-inch and 15-inch models are capable of up to 10 hours of wireless web browsing, up to 10 hours of iTunes movie playback, and up to 30 days of standby time on a single charge.

Following the release of macOS Sierra 10.12.2, Apple told The Loop that, after a lot of testing, it stands behind the 10-hour battery life advertised.

As more user reports surface, we should be able to see if the alleged battery life improvements are circumstantial or part of a larger trend.

farewelwilliams
you'll be amazed at how removing the time estimate creates a placebo for improved battery life
Score: 51 Votes (Like | Disagree)

dmylrea
Apple forgot to mention that CPU and GPU performance were cut by 50% in order to get longer battery life. 10.12.3 will remove the activity monitor so people won't be able to tell... :)
Score: 38 Votes (Like | Disagree)

Red Oak
Stop ******** on Apple all the time MR posters. Apple employees are not stupid. Get some balance on how you view things..Gain some self control before you post

If this battery issue was in the Windows world, you'd be completely on your own. To those threatening to make the jump - go and good luck
Score: 38 Votes (Like | Disagree)

Brookzy
Meanwhile engineers in Cupertino are spitting out their coffee in laughter at this because they changed nothing affecting power consumption... :P

TMRJIJ
I admire the way the haters are making up a placebo effect. You guys were perfectly okay with jumping on the 'Apple is Doomed' train immediately when people started having battery problems, now you can't be satisfied by an fix for it.
Unnoted or not in the release notes, it makes no sense that the removal of a stupid time indicator would cause people to think battery life is automatically better. Logically, the battery life would be worst if the problem was not resolved because of the update and reindexing that come after it.
Just immaturity and stupidity throughout this forum.
Score: 17 Votes (Like | Disagree)
Read All Comments