Tim Cook Named One of 'The World's Best-Value CEOs'

A new ranking by Bloomberg today has listed "The World's Best-Value CEOs" in order of how well their yearly salaries align with their performance at each company. In total, 100 CEOs of companies from around the world -- including Apple, Alphabet, Verizon, and China Mobile -- were placed in the ranking to determine which organizations "are getting the best value from their CEO."

According to the list, Apple has the eleventh-most-valuable CEO with Tim Cook, whose latest reported pay of around $10.3 million is "a bargain" when compared to Apple's three-year average economic profit of $22.6 billion. Cook's pay is broken down into a salary of $2 million, non-equity incentive plan of $8 million, and "other" compensation of $281,327. Not part of his base salary, Cook netted over 1.2 million Apple shares worth over $130 million upon reaching his fifth anniversary as CEO on August 24, 2011. 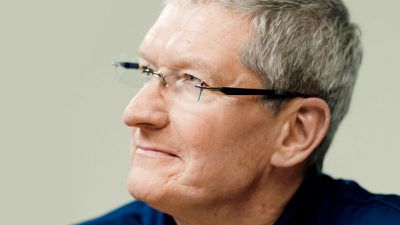 Cook's lower compensation in comparison to other CEOs, along with his performance at Apple, have earned him the spot near the top of Bloomberg's chart. The rankings included companies with market capitalizations of $1 billion or higher, and each CEO had to have served three or more fiscal years to be considered.

Are chief executive officers worth their pay? Apple CEO Tim Cook's $10 million in compensation isn't chump change, but it's a bargain when you compare that to the company's massive average economic profit over the last three years. Other companies pay their CEOs much more, but seem to get a lot less for it. Bloomberg looked at the pay-for-performance ratio of 100 CEOs at some of the largest companies around the world to see which companies are getting the best value from their CEO.

In the number one spot is Kosta Kartsotis of Fossil Group, who has waived compensation completely on an average three-year economic profit of $147 million for the company. Alphabet's Larry Page is in 3rd, Verizon Communication's Lowell McAdam is in 14th, and AT&T's Randall Stephenson is in 65th. Check out Bloomberg's full rankings of The World's Best-Value CEOs right here.

I'm sure not everyone here would agree, to put it nicely.

That's because most members are more interested in the products than the profits.
Score: 31 Votes (Like | Disagree)

sunapple
I'm sure not everyone here would agree, to put it nicely.
Score: 29 Votes (Like | Disagree)

aussiephil
I feel like this economic path to success under Cook's rule isn't a sustainable one. Previously, it would seem that Apple's focus was to surprise consumers with amazing technology and impeccable innovation. But now it would seem that their focus is on squeezing costs and increasing margins in every facet of their business. They're taking advantage of what has made them successful but there's only so much mediocrity their loyal followers are willing to put up with before they become loyal no more.
Score: 24 Votes (Like | Disagree)

keysofanxiety
Cook is a logistics genius. He really is. What he's achieved with manufacturing and markup is unparalleled in the industry.

What he suffers with is something that Jobs was so good at: looking at products from the view of the consumer. If Jobs sat down and used an entry-level Mac Mini in 2016, he'd question why it was so damned slow. The engineers would answer that it's due to the 5400RPM drive. So Jobs would simply make sure it's a Fusion drive at minimum to give the impression of quick real-world performance.

That's what's most frustrating. There's very little that needs to be improved to make every Mac across the board perform to an Apple-quality level. But sometimes I get the feeling he's looking to upsell more than the consumer getting a great product, regardless of what they buy.
Score: 24 Votes (Like | Disagree)

gim
Ripping off customers must be a highly regarded skill for a CEO.
Score: 20 Votes (Like | Disagree)

Chupa Chupa
This is "Best Value" not "Best" overall. It's like a $6.99 steak at Golden Coral. Sure it's a "value" as far as steak goes but it's not the best quality and later on in the evening it may come back to haunt you.

These kind of rankings are nothing more than click-bait because they are so one dimensional they fail as useful information.
Score: 14 Votes (Like | Disagree)
Read All Comments