The new Pokémon can only be found in eggs, which can be obtained from PokéStops. Eggs are hatched by walking a set distance with the iPhone. Niantic and The Pokémon Company are keeping some of the new Pokémon a secret, and have only announced Togepi and Pichu.


From December 12 at 10:00 a.m. Pacific Time to December 29 at 11:00 a.m. Pacific Time, Pokémon Go players have a chance to catch a special holiday-themed Pikachu, who is wearing a festive hat for the holiday season. Niantic says the new Pikachu will "appear in large quantities.
"

"Fans around the world fell in love with Pokémon GO for the opportunity to encounter Pokémon--beloved pop-culture and gaming icons for 20 years--in the real world. Matched with the innovative technology and development of the mobile game by Niantic, hundreds of millions of players have filled their Pokédexes with over 100 available Pokémon in Pokémon GO while exploring the world around them," said J.C. Smith, senior director of consumer marketing at The Pokémon Company International. "The opportunity to hatch select Pokémon originally discovered in the Johto region is just the beginning of how more Pokémon will be added to the game for Trainers to continue their Pokémon GO adventures."

Niantic has also established partnerships with companies like Sprint, which will see 10,500 Sprint, Boost Mobile, and Sprint at RadioShack locations turned into PokéStops and Gyms.

Pokémon Go can be downloaded from the App Store for free. [Direct Link]

ccrunner_tj
What about the Apple Watch app? I've been looking forward to that!
Score: 12 Votes (Like | Disagree)

w pokemon? you will wait forever. You can buy their bracelet thingy though.

They announced it at the iPhone keynote for winter 16
Score: 2 Votes (Like | Disagree)

That's kind of like asking if people still play ice hockey in the cold. If they enjoy it, they will endure the cold weather. I still play in cold temps but I use my car so it's no hardship for me ;-)

Don't brag about playing in the car. Niantic thinks they are traffic cops and can decide when and how I play my own games. Niantic killed this game plain and simple. With every "update", they just took something away. Took them 3 months to show me which Pokémon are at pokestops.
[doublepost=1481580855][/doublepost]Replace NIANTIC with GAMEFREAK and the numbers will slowly return
[doublepost=1481581160][/doublepost]

They announced it at the iPhone keynote for winter 16

When is it decided which pokemon is in an egg? Are the eggs I have now guaranteed not to have Pichu, Togepi, or anyone else new in them, so I should just discard them, or should I go ahead and hatch them?

I suspect it randomly decides which pokemon was in the egg at the time it hatches, but maybe I'm wrong...

Also, this is a poor time of year to update an app like this. I would have held back updates until the spring... I'm not interested in walking around in the snow with my phone out.

It doesn't snow everywhere, the game wasn't designed for you alone anyway.
Score: 1 Votes (Like | Disagree)

ArtOfWarfare
When is it decided which pokemon is in an egg? Are the eggs I have now guaranteed not to have Pichu, Togepi, or anyone else new in them, so I should just discard them, or should I go ahead and hatch them?

I suspect it randomly decides which pokemon was in the egg at the time it hatches, but maybe I'm wrong...

Also, this is a poor time of year to update an app like this. I would have held back updates until the spring... I'm not interested in walking around in the snow with my phone out.
Score: 1 Votes (Like | Disagree)

caipirina08
In addition to the Sprint / Star Bucks deal, it appears that in the Asian market Niantec has struck a deal with Japanese company AEON. There is a brand new pokestop in my area (Hanoi / Vietnam) with their logo on it. 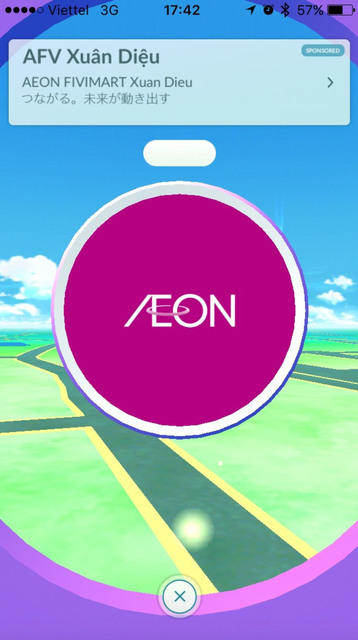 Anyone else is upset that since a few updates ago the app lowers the audio volume of iTunes? I now have to bring a separate audio player with me when I go for walks, collecting balls :)
Score: 1 Votes (Like | Disagree)
Read All Comments