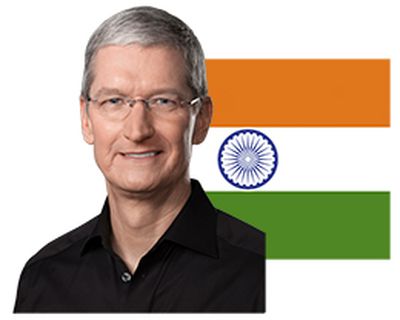 Apple is set to create a new distribution center in India to consolidate its logistics and supply chain in the country, according to The Economic Times. The center will be its first in India.

Currently, Apple products are brought to India via several different cities: Chennai, Mumbai, Bengaluru, New Delhi, Hyderabad and Chandigarh. Each city has a different value-added tax (VAT) rate, which causes price discrepancies when the products are shipped directly from the airport to distributors. Further, online retailers in the country source their inventory from low-VAT territories so they can gain a price advantage over brick-and-mortar retailers.

The distribution center, which Apple's global logistics partner DB Schenker will own and operate, will be in the city of Bhiwandi, near the city of Mumbai. An unnamed executive told The Economic Times that the center will "allow Apple to stock its products adequately, will ease operations and streamline its logistics and supply chains." It will also help Apple maintain consistent pricing for its products.

Apple has been ramping up efforts to gain a larger foothold in India. In July, the Indian government officially adopted rules that would pave the way for the first Apple retail stores in the country. The company is also opening up an iOS app design and development accelerator and a campus focused on Maps development in the cities of Bengaluru and Hyderabad, respectively. The Cupertino company has also asked for financial incentives to make it easier to create an iPhone manufacturing plant in India.

chr1s60
India must be the number one buyer of watch bands.
Score: 3 Votes (Like | Disagree)

Wiesenlooser
Welcome to Apple 2016: when 90% of news ar business deals and at the end of the year they'll throw you a bone via an expensive MacBook Pro.
Score: 3 Votes (Like | Disagree)

ganja24
Apple in India... No thank You, get your act straight Apple
Score: 3 Votes (Like | Disagree)

djcerla
Apple is killing it in India, with 66% of hi-end smartphone sales. No wonder they need better logistics.
Score: 3 Votes (Like | Disagree)
Read All Comments

Friday December 3, 2021 7:10 am PST by Hartley Charlton
Apple's AirTags are being used in an increasing number of targeted car thefts in Canada, according to local police. Outlined in a news release from York Regional Police, investigators have identified a new method being used by thieves to track down and steal high-end vehicles that takes advantage of the AirTag's location tracking capabilities. While the method of stealing the cars is largely ...
Read Full Article • 220 comments

Sunday December 5, 2021 7:55 am PST by Hartley Charlton
Apple is working on five new Macs for launch in 2022, including a new version of the entry-level MacBook Pro, according to Bloomberg's Mark Gurman. In the latest edition of his "Power On" newsletter, Gurman said that he expects Apple to launch five new Macs in 2022, including: A high-end iMac with Apple silicon to sit above the 24-inch iMac in the lineup A significant MacBook Air...
Read Full Article • 152 comments

Sunday December 5, 2021 8:54 am PST by Hartley Charlton
Apple is preparing to update three of its iPad models in 2022, including the entry-level iPad, iPad Air, and iPad Pro, according to Bloomberg's Mark Gurman. In his latest "Power On" newsletter, Gurman reiterated Apple's plans to release a new iPad Pro in 2022, featuring a new design and wireless charging, and clarified the company's intention to release new versions of the entry-level iPad...
Read Full Article • 116 comments