Steve Jobs' history with the now-acclaimed animation studio Pixar began in 1986 when the former Apple CEO purchased The Graphics Group, which was one third of the Computer Division of Lucasfilm, renamed it Pixar Animation Studios, and began guiding it into a burgeoning feature film production company. In a new book called To Pixar and Beyond, written by former Pixar chief financial officer Lawrence Levy, the history between Jobs and Pixar is highlighted and deepened by looking at the struggling early years of the studio (via Bloomberg).

With the subtitle "My Unlikely Journey With Steve Jobs to Make Entertainment History," Levy's financial knowledge of Pixar's early days helps to put the struggles that Jobs had in the mid-nineties with the company into context. By 1994, Jobs was said to have spent $50 million investing in Pixar, and his workings with some of the company's employees was reported as being "frayed." 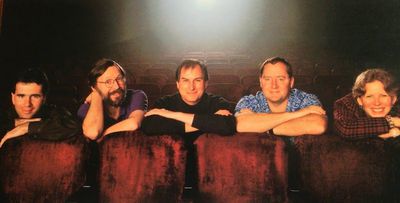 Pixar executives circa 1995: Lawrence Levy, CFO; Ed Catmull, CTO; Steve Jobs, CEO; John Lasseter, VP of Creative; Sarah McArthur, VP of Production
Working in 1994 as a technology executive within Silicon Valley, Levy said he received a call from Jobs that November and soon after became Pixar's CFO due to viewing rough footage of what would eventually become Toy Story, which was one year from debuting in theaters. Following the success of that movie, Levy remembered looking into the original deal Jobs made with Disney, and much of his new book describes the lengths the two went through to validate Pixar's worth within the larger context of Disney, eventually leading to the 2006 purchase of Pixar by Disney.

The book isn't all business, however, with a few sections apparently offering "more insight" into the world of Steve Jobs when he wasn't working at Apple.

For those who can’t get enough of Jobs, Levy offers more insight into his world. A neighbor of Jobs in Palo Alto, California, back in the day, Levy describes a surprisingly laid-back scene where he could simply stroll through the entrepreneur's back door and go on long weekend walks with him, chatting about the business. The more controlling side of the future billionaire also comes across, as Levy describes a carefully choreographed Fortune profile in 1995 that rankled Pixar staffers because it focused mostly on Jobs.

Levy's book ends at the sale in 2006, with Bloomberg noting that "readers looking for more of Pixar's recent history won’t find it here." The history of the studio within the book accounts for movies ranging from Toy Story to The Incredibles, but doesn't include any behind-the-scenes knowledge of more recent releases, like last year's Inside Out and The Good Dinosaur.

To Pixar and Beyond can be purchased on the iBooks Store for $14.99. [Direct Link]

(Image via This Day in Pixar)

MartinAppleGuy
More books coming out of Cupertino than computers...

macduke
Wow, a book that even a middle class person such as myself can afford!
Score: 6 Votes (Like | Disagree)

Steve Jobs had basically nothing to do with ANY Pixar movie. Ed Catmull (CEO of Pixar Animation) wrote an amazing book, called Creativity Inc., (you may have seen its cover before) about how Pixar movies are done and how the company keeps creativity up.
Steve did a lot things for Pixar, but contribution to movies was not one of them.
[doublepost=1479935624][/doublepost]

I did. Simply amazing.

I feel like Pixar hasn't been the same since Jobs died.

The sale to Disney probably had the greatest impact.
Score: 2 Votes (Like | Disagree)

ArtOfWarfare
I feel like Pixar hasn't been the same since Jobs died. Maybe it's just a coincidence, but some of their more recent movies were... just not as good as the rest of Pixar's movies. Good Dinosaur, Cars 2, Monster University, and Brave were all kind of lousy for Pixar. I'm scared because they're doing a Cars 3.