Setapp, an upcoming subscription service from MacPaw, aims to offer a Mac App Store alternative and change the way customers obtain software for their Macs. Setapp will make 40+ popular Mac apps available to Mac users for a flat monthly fee at launch, and there are plans to continually add new apps as the service grows.

Much like Netflix, Setapp will charge users a flat $9.99 fee per month, giving them access to a wide range of Mac apps like RapidWeaver, Marked 2, Ulysses, iMazing, iStat Menus, Toast Titanium, CodeRunner, Blogo, Pagico, and more. It's an interesting concept that has already attracted quite a few app developers, and could attract many more popular apps should the concept catch on. 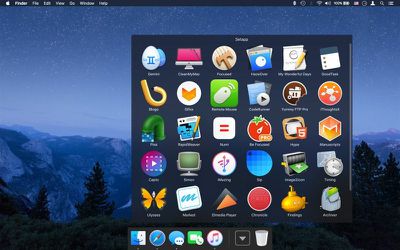 Setapp includes continual updates, so users who pay the subscription fee to access apps will not need to pay separately for future updates, nor will they need to make in-app purchases or pay additional money to access full app functionality. Setapp apps will also work offline, when no internet connectivity is available, and will be installed through a main Setapp app.

Much like Apple's own Mac App Store, Setapp pays 70 percent of revenue to developers and takes a 30 percent cut, but it also provides developers with a continuous monthly revenue stream, which could be more appealing than the Mac App Store.

Setapp is rumored to be planning to have a beta testing period in the near future, which will give Mac users a chance to try out the subscription service before it launches. Mac users can sign up to request a beta invite through the Setapp website.

SoSickSadNslOw
Nope. I'd rather pay once and be done with it. The idea of 'Subscription' has turned into twisted set of rules where you get things momentarily, things that should be owned permanently.
Score: 23 Votes (Like | Disagree)

Why do you feel the need to own them permanently? I'm not watching the same movies, playing the same games, listening to the same songs, or using the same apps as I was just a few years ago.

It's essentially "wasted money" unless you have some sort of collector mania.

It's got nothing to do with being a collector. I just don't see the point of paying them every month when I'm sure I won't be using every app offered so why keep on paying them?

I personally like the idea of owning the things I want/need, where I can. So called 'wasted money' won't be nearly as much as you'd end up paying them throughout the months/years you'd keep the subscription.

$120 a year spent on apps, $120 spent on streaming music, $120 streaming movies every year just does not make sense to me. I'd rather spend all that money on owing albums, movies, apps which I really want and can always go back to when desired without the worry of direct debits.

Of course that's my personal opinion and your consumption could completely differ.
Score: 12 Votes (Like | Disagree)

Why do you feel the need to own them permanently? I'm not watching the same movies, playing the same games, listening to the same songs, or using the same apps as I was just a few years ago.

It's essentially "wasted money" unless you have some sort of collector mania.

RC Mike
Subscriptions have ruined so many great software products. I get the desire for a continuous, predictable revenue stream, but... It leads to mediocre products and consumer lock-in.

It's killed the educational software market. My organization spends much less on software than we used to, back when we could purchase it outright.
Score: 7 Votes (Like | Disagree)

djeeyore25
I need an app just to keep up with all my subscriptions, though the app would undoubtedly require a subscription as well.
Score: 6 Votes (Like | Disagree)

Juicy Box
It seems like the tech world is becoming subscription-based. Essentially it is renting music, TV, apps, and even hardware.

I am not saying it is good or bad, just pointing out the trends I see.
Score: 3 Votes (Like | Disagree)
Read All Comments