Back in September, Apple announced plans to start removing outdated apps from the App Store, promising to eliminate apps that are non-functional, not compatible with recent versions of iOS, or that do not adhere to current review guidelines.

According to data app analytics firm Sensor Tower shared with TechCrunch, Apple has made good on that promise. In October of 2016, the number of apps removed from the App Store increased by 238 percent, with Apple purging a total of 47,300 apps throughout the month. 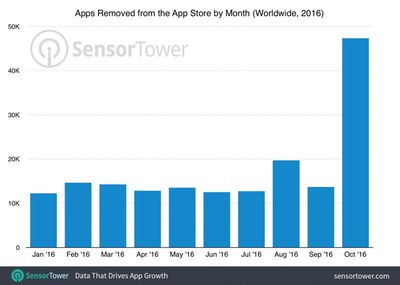 On an average month, Apple removes approximately 14,000 iOS apps, so October's much larger purge represents a significant step towards cleaning up the App Store.

Developers with problematic apps were notified starting in September, and Apple gave them 30 days to make changes to prevent their apps from being eliminated from the App Store. Apps that did not see updates were then removed.

The App Store purge is part of Apple's effort to improve the App Store. In recent months, Apple has opened up app subscriptions to all product categories, introduced more favorable revenue splits, improved sharing tools, and added ads to App Store search results to give developers new ways to promote their apps.

AngerDanger
They say if you're really quiet in an Apple server-farm, you can sometimes hear the whisper-like flatulence of a fart app that has passed its prime.
Score: 27 Votes (Like | Disagree)

sheetspd
I think more importantly they should be reinventing the interface and design of the App Store.
Score: 10 Votes (Like | Disagree)

What happens if you own one?

You can simply update your app and resubmit it.
Score: 8 Votes (Like | Disagree)

sniffies
Surprised AppShopper is still there.
Score: 5 Votes (Like | Disagree)
Read All Comments