A day after the first 13 and 15-inch MacBook Pros with Touch Bars began preparing for shipment to customers, Apple and LG's UltraFine 4K Display has begun shipping. Shipments are expected to arrive next week, with one MacRumors forum member noting November 15 as their delivery date. 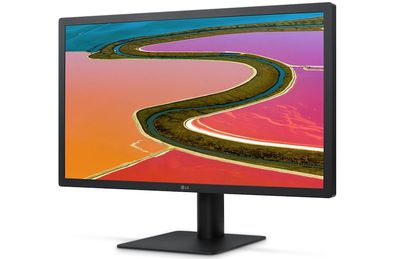 The 21.5-inch UltraFine 4K Display went up for pre-order at the same time as the new MacBook Pro with Touch Bar. At the time, deliveries were estimated to arrive on November 15 at the earliest. Current delivery estimates are quoted at 5 to 6 weeks.

Apple debuted the UltraFine Display at its MacBook Pro event last month in 4K and 5K variations. While the 4K display has been available for pre-order since the event, the 5K display is not yet available. The Cupertino company said it partnered with LG to develop the displays specifically for the new MacBook Pro, with Apple making sure that the displays are optimized for its products. Shortly after announcing the displays, Apple confirmed it was out of the standalone display business.

Rivvvers
I've followed Apple for 18 years, and I know one thing, Steve would have never done this.
Score: 54 Votes (Like | Disagree)

Avatar74
Is it the right business decision? Probably. Is it the right Apple decision? No. The Apple you know is over. They cannot keep thriving and producing double digit growth from where they stand if they try to grow an even larger base of people who pay $1700 for a display. That would be like Ferrari hoping to be Ford.

The current Apple leaders want the company to be Ford. Their focus is gone. They're in a game of me-too technocracy. So there you are.
Score: 53 Votes (Like | Disagree)

Wiesenlooser
Promoting this ugly POS is the best indicator that something is wrong with Apple.

I really want to buy the 5k as I love the deep integration, color gamut, and simple cables.

But this is so ugly. And the details are wrong. The forehead. The rear Power plus is in odd location off-center so cable drops down side versus behind the support pole. The thick tick support tube and ugly base. And the cheap plastic. So much for caring about the environment.

Clearly this deal was last minute by Apple and rushed by LG. It's why there are no pre-orders. it's still in the labs. I just hope there aren't quality issues due to the rush.

Apple needs to remember pros care about the aesthetic of their environment. They should have insisted on a better case, or even better, had Jon's team design something.

My dream is LG fixes the case and we see a new form factor before launch. I'll buy two if they clean up the form factor.

It shows that it is all about the $ now completely. At apple, does anyone use and external monitor? Would these monitors line up Apples "all Apple" type of ecosystem, especially in their Campus? Apple use to be into the "look" of things and everything being in synergy. They made apple brand mouses, keyboards etc. just so everything is in synergy for the inclusive experience. They use to make the products for themselves (or at least that is what they use to say).

Jony is all about design over form which is ok (that is what he prefers). Because they cannot get their margins on a monitor they stop making a monitor?, that sounds more like a company that is solely "bean counting" which now the New Apple (its ok I guess - it made them where they are today). Again, like I have said before, if a company's vision is that, it is ok (as most have to be to stay in business) but apple does not need to operate now like this.

It shows that management does not use their products much besides for just photos of their grandkids, surfing the internet and "bean counting" spread sheets (probably now use Excel). I suspect that they only use an iPhone and the the new underpowered MacBook because that is all they need. I would love to know what tech gear they actually now use personally.

When Steve Jobs worked with Pixar the Mac Pro was important...why? because he was hanging around those that do creative stuff and wanted them to use Apple stuff. When watching "Toy Story" being created, he probably hated to watch it on a windows XP machine or a Dell or Samsung (ugly at the time) monitor. The Cinema Display was born with the all black edge, giving it a "Cinema feel"...thus the name. With an Apple silver on Black logo on the bottom middle while "His" collaborated movie creation seen above. A beautiful thing... (My thoughts of course). I own the expensive thunderbolt monitor and before the Cinema monitor also.

The Mac Pro and the Mini excelled when Jobs was around because....he hung around creative content developers who said, This is what we need to do your dreams Steve (i.e. animation stuff). So..Mac Pro had to be a power house to process animation and video...and a Apple monitor to be seen on so it did not drive jobs crazy seeing his creation on nothing less...