Softorino today announced the launch of its next-generation WALTR app, introducing WALTR 2 for Mac. WALTR 2 builds on the features introduced with the original WALTR app, making it easier than ever to transfer any file from a Mac to an iOS device.

With WALTR 2, you can transfer all kinds of media file types to an iPhone or iPad, even if they're not in a format that's normally compatible with iOS. It supports music, ringtones, videos, PDFs, ePubs, and more, converting files when necessary. If you transfer an MKV or AVI, for example, WALTR 2 will convert it to a usable format and put it directly in the built-in iOS video app.

The same goes for music -- upload any music file and it'll be transferred to the Music app with no loss of quality. Uploaded music is even properly recognized in Apple Music.


Using WALTR 2 is simple. You open the WALTR 2 app, plug your iPhone or iPad into your Mac (or use the new Wi-Fi feature) and then simply drag and drop the file you want to transfer to an iOS device into WALTR 2. WALTR 2 works with all iPods, iPads, and iPhones, starting with the iPod Classic from 2001.

With Automatic Content Recognition for music, movies, and TV shows, WALTR 2 can fill in metadata information, and a new Wi-Fi detection feature allows WALTR 2 to automatically find nearby iOS devices so transferring content can be done without a USB cable if desired. File transfers go much quicker with a cable though, with Softorino promising average transfer speeds of 2GB per minute. 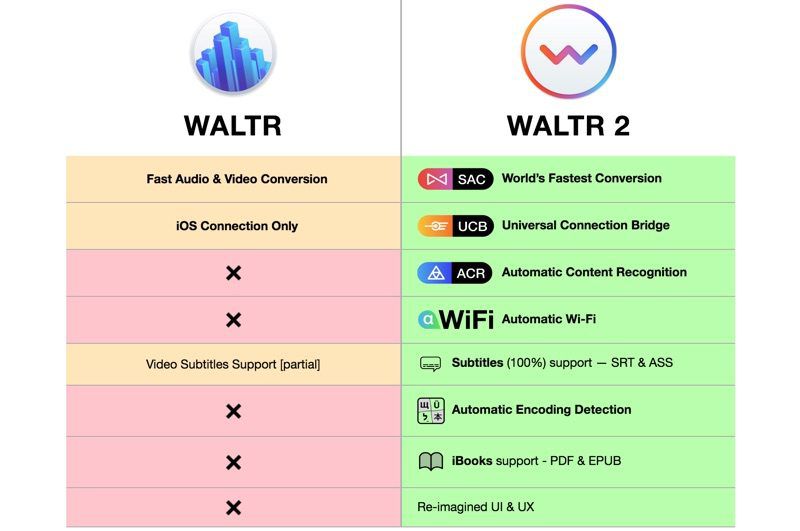 WALTR 2 is available for download from the Softorino website for $39.95. Existing WALTR users can upgrade for $19.95. Downloading the app offers users with a 24-hour free trial to try it out.

We're also giving away 10 copies of WALTR 2 to MacRumors readers. To enter to win, use the Rafflecopter widget below and enter an email address. Email addresses will be used solely for contact purposes to reach the winners and send the prizes. You can earn additional entries by subscribing to our weekly newsletter, subscribing to our YouTube channel, following us on Twitter, or visiting the MacRumors Facebook page.

Due to the complexities of international laws regarding giveaways, only U.S. residents who are 18 years of age or older are eligible to enter. To offer feedback or get more information on the giveaway restrictions, please refer to our Site Feedback section, as that is where discussion of the rules will be redirected.

Kiro
"Using WALTR 2 is simple. You open the WALTR 2 app, plug your iPhone or iPad into your Mac"

Not so simple with the new macbook pros...
Rating: 12 Votes

My mac does not support AirDrop

m.x
Can someone explain to me why I should stop using AirDrop to transfer my files wirelessly from my Mac to my iPhone and instead pay $39,95 for an app which does the same?
Rating: 6 Votes

Note: I absolutely do *not* want to use the default app over e.g. VLC for longer videos... Also, what's with the auto-conversion? Converting video takes time if done well and I'd really like to pick the parameters. Doing it quickly means bad quality.

Apps are available for most of the file formats mentioned and iOS has so far been able to pick out apps as possible receivers in the pop-up - usually several to pick from for common formats.

Only plus I see is transfer speed? That's only for larger files though (though did transfer a 2+GB file over AirDrop once and 200+MB ones on a regular basis).

I guess I'm not in their demographic.

Edit: To be fair, removing the need for a wireless network might be reason enough for someone to get this app.


WALTR 2 is all about just being that "one drop-zone to eat it all give you the result".

You only have to use this one app. Instead of having a combination of VLC, Handbrake, Playxtreme, flac player, iTunes or more.

There's no quality loss, what you drop into W2 is what you get. For example, FLAC turns into ALAC on the fly and keeps all 100% quality. MKV turns in an M4V on the fly.

It's faster because it does the conversion/transcoding part on the fly, whereas every other solution will make you first convert it and then use iTunes to put on the device. Plus, you never worry about choosing proper settings for the conversion or "how do I make this format work". That's the whole idea of W2, it's supposed to be a user-friendly drop zone that magically eats anything you throw at it and puts it into the proper place. No need to do anything extra.

As a result, everything I wrote above allows WALTR 2 to save time. And if you want the fastest and easiest solution, then sure you can pay for it ;)
Rating: 5 Votes

ike1707
That dude should be behind the camera, not a hype man. *shudder*
Rating: 4 Votes

Floris
That video, don't try to be Apple when you're not.. #cringe, sorry... was hard to watch.
Oh well, it's magic i guess.
Rating: 3 Votes

xxnemoxx
My mac does not support AirDrop
Rating: 3 Votes

Can someone explain to me why I should stop using AirDrop to transfer my files wirelessly from my Mac to my iPhone and instead pay $39,95 for an app which does the same?

You can't airdrop songs and movies onto your iOS device without it going to the camera roll. WALTR takes any file and puts it in the native app without any compression or messing with iTunes. Super useful and even changes file formats which is pretty awesome.
Rating: 2 Votes

Denmac1
I opted in as a previous user and got it for $25. I really like it. The transfer is quick and I find the quality to be very good.
Rating: 2 Votes

And where does it store the transfered files?

will there be any drop in quality when it converts files during transfer?


They go to the default music/video player or iBooks. This means that all the files, even those that were in unsupported formats previously, are available for native playback.

I've been using WALTR for a while now, no quality loss so far! Really happy with it.
Rating: 2 Votes
[ Read All Comments ]