Apple today released a major update for Final Cut Pro X, its video editing software aimed at professionals. Today's update includes a new look for the software, support for the Touch Bar included in the new MacBook Pro, and a host of other features.

Final Cut Pro X features a revamped interface that's designed to streamline the layout for optimal screen space on the MacBook Pro, plus it includes a darker, flat look for more focus on content. There are customizable workspaces that let users select ideal layout options for organizing, editing, and color grading, even across more than one monitor. Full support for wide color workflows is included. 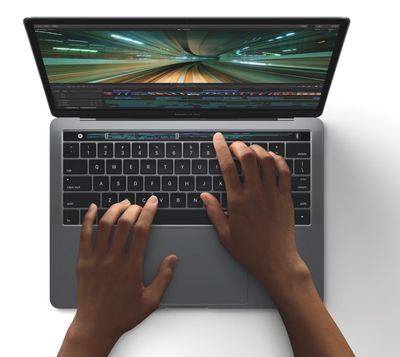 There's a new Magnetic Timeline to make it easier to see a full film at a glance. Dialogue, music, and effects are all highlighted with custom color coding, and there's now an option to drag and rearrange the vertical layout of a timeline or highlight audio roles during the editing process.

The Final Cut Pro X update also includes support for the Touch Bar on the MacBook Pro, introducing dynamic controls that change based on which tool is in use. With the Tool Bar, users can do things like adjust audio levels, trim, navigate through a timeline, initiate playback, and more.

Motion 5.3 and Compressor 5.3 have also been updated with Touch Bar support and a new darker look to match the Final Cut Pro X update. Motion 5.3 includes support for wide color workflows and 3D text enhancements, plus it offers a new Align behavior for quickly connecting separate objects. Compressor 4.3 features wide color support and updates and improvements that make it quicker to deliver packages to the iTunes Store.

thomasgrovecarter
These are my top 10 new features...

natd1993
Putting more focus into the touch bar gimmick than any other part of this underpowered software shows Apple's lack of attention to the pro market.
Score: 7 Votes (Like | Disagree)

Mr-Stabby
I think the best part of this update is the fact FCPX now supports libraries to be saved on SMB3 shares. So you finally don't need a SAN.
Score: 4 Votes (Like | Disagree)

Maybe I am wrong, but I heard FCP has been abandoned by the PRO community since Premier and Avid are lightyears ahead and can be run on more powerful hardware (wintel machines) which costs less than outdated Mac Pros.

Feel free to correct me.

May be true, but there are still major motion pictures being edited on Final Cut. For me it was the choice to pay one time (FCP) vs. perpetually (Adobe) AND the difference in render times on my MBP 15 AMD. Rendering 4K movies is exponentially faster on Final Cut because of optimization. Granted we are just a lowly YouTube channel but we are satisfied with FCP!

Maybe I am wrong, but I heard FCP has been abandoned by the PRO community since Premier and Avid are lightyears ahead and can be run on more powerful hardware (wintel machines) which costs less than outdated Mac Pros.

Feel free to correct me.

Which comes down to what the PRO community actually is. Is it the "elite" working for film and television and maybe commercials or are other people making money with their editing work also included?

Premiere Pro and Media Composer are not light years ahead when one considers the file based approach FCP X is using and all the advantages of files and meta data.
MC and PPro are still using tracks in their timelines, which was okay when coming from film and video (since it is the most digital equivalent they could think of back then), but FCP X does take advantage of the digital age and how to work with digital data.

And I say that as an MC lover and PPro user, as I have finally switched to FCP X this year.

The Multicam capabilities, even if forgotten in the first version of FCP X, are leagues ahead of MC (which I have used to sync probably thousands of clips in the past decade, by hand then with Plural Eyes).

I am currently editing a music video with 32 angles and I can do that on a 13" rMBP with proxies while playing back 16 angles at the same time with the Library stored on a 2.5" USB 3.0 HDD. Can MC do that?

And look at the search capabilities. Again ahead of MC with all its handmade bins and folders and manual sorting. FCP X can do that automatically if you use tags (still faster than manually creating bins and folders).

MC has its advantages in multi user / multi project environments though, like broadcast networks and production houses, but it is actually slower to do the work.
Score: 2 Votes (Like | Disagree)
Read All Comments