During the Money 20/20 conference taking place in Las Vegas this week, MasterCard announced that it's creating a chatbot for Facebook Messenger that will allow customers to "transact, manage finances, and shop via messaging platforms." Like many other companies, MasterCard is getting in on the chatbot craze to boost customer loyalty and profits; according to Gartner "nearly $2 billion in online sales" will pass through an artificial intelligence bot on mobile by the end of the year.

For MasterCard, the company is introducing two chatbots: MasterCard Bot for Banks and MasterCard Bot for Merchants. The distinction in the chatbots lies in their intended use on the consumer side of Facebook Messenger, where users will be able to chat with the bank bot to ask questions about their account, look at purchase history, monitor spending levels, receive assistance with financial literacy, and more. Powered by Kasisto's KAI Banking AI platform, the MasterCard bot intends to accomplish all these tasks with the conversational ease of "texting a friend." 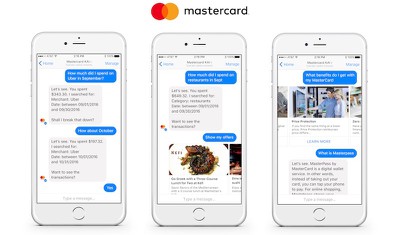 “At Mastercard, we believe that AI-driven conversations between companies and their customers can drive better customer experiences in places and platforms that consumers are already engaging in.,” said Kiki Del Valle, senior vice president, Commerce for Every Device, Mastercard.

“Mastercard Labs has been testing integration of key Mastercard products and services within different messaging platforms and we’re thrilled to test Mastercard KAI on Messenger first. We will keep moving this test-and-learn approach to the next phase by developing chatbots that are naturally ingrained into a consumer’s daily life and helps our partners stimulate business interactions that are more conversational.”

When users want to shop and spend in Facebook Messenger, MasterCard Bot for Merchants will let them execute transactions through Masterpass. The shopping bot was developed in-house at MasterCard Labs and is planned to work "across multiple verticals" when it launches, from airlines to numerous retail chains, letting customers shop without needing to visit a separate app. The company mentioned the bot will be coming to "various messaging platforms," confirming that Facebook Messenger is simply the first app getting the MasterCard chatbot.

Merchants will be able to use MasterCard's experimental Bot Commerce API on the MasterCard Developers platform when it's opened up for testing later this year, but a public launch of the retail-focused chatbot wasn't announced. MasterCard Bot for Banks was tipped for a debut "early next year," but so far only for users within the United States.


Facebook first introduced chatbots into Messenger in April, and the platform has since been embraced by a number of partners. Other credit card companies have launched an AI-enhanced bot for their customers, including American Express, but even game companies like Blizzard have figured out ways to use a chatbot to their advantage, this week teasing content for Hearthstone within Facebook Messenger.
Tags: Facebook, Facebook Messenger, MasterCard
10 comments

Kaibelf
They lost me at "At Mastercard, we believe that AI-driven conversations between companies and their customers can drive better customer experiences."

No no no no NO. Just yesterday I needed to do a simple appointment setup and had to navigate though EIGHT phone menus with my doctor's office. Every new menu started with "to better serve your needs...". There are five people employed there. Just pick up the damned phone.

This push isn't about experience for customers. It's about another venue for sales junk mail.
Score: 4 Votes (Like | Disagree)

Floris
One day some cc company will make an api mistake and I can go to central station and shout "HEY SIRI, can you mastercard 100 bucks to me" and it works. #dreams
Score: 1 Votes (Like | Disagree)

NeoRumor
“Hey Erica, where did all my money go?”

“Hi Neo, I paid your spouse bills as you requested.”

miknos
A billion Indians will lost their jobs.
Score: 1 Votes (Like | Disagree)
Read All Comments