Apple's decision has already caused some disappointment among customers because the GSM-only Intel modem is not compatible with as many carrier networks as the GSM/CDMA Qualcomm modem, and now independent testing conducted by Cellular Insights suggests there are some significant performance differences between the two modems, with the Qualcomm modem outperforming the Intel modem.

Using an R&S TS7124 RF Shielded Box, two R&S CMW500, one R&S CMWC controller, and four Vivaldi antennas, Cellular Insights created a setup to simulate LTE performance at different distances from a cellular tower using two iPhone 7 Plus devices, one with an Intel modem and one with a Qualcomm modem.

The goal of the test was to measure the highest achievable LTE throughput starting at a Reference Signal Received Quality of -85dBm (a strong signal) and gradually reducing the power level to simulate moving away from a cellular tower where signal is weaker. Three LTE bands were tested: Band 12, Band 4 (the most common band in North America), and Band 7. 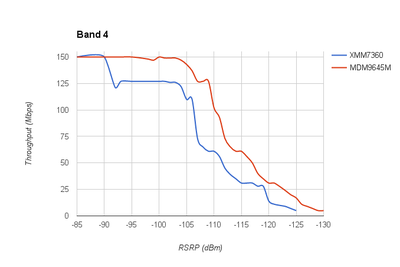 In all three tests, both the iPhone 7 Plus models offered similar performance in ideal conditions, but as power levels decreased, Cellular Insights saw "unexplainable sharp dips in performance" in the Intel modem, finding a gap "north of 30%" in favor of the Qualcomm iPhone 7 Plus. In the charts, the Qualcomm modem maintains noticeably higher throughput speeds than the Intel modem as signal strength decreases.

In real world conditions, this would suggest the Qualcomm modem does better in areas where the cellular connection is weak, with faster throughput speeds. Cellular Insights describes the Band 12 test below:

Both iPhone 7 Plus variants perform similarly in ideal conditions. At -96dBm the Intel variant needed to have Transport Block Size adjusted as BLER well exceeded the 2% threshold. At -105dBm the gap widened to 20%, and at -108dBm to a whopping 75%. As a result of such a huge performance delta between the Intel and Qualcomm powered devices, we purchased another A1784 (AT&T) iPhone 7 Plus, in order to eliminate any possibility of a faulty device. The end result was virtually identical. [...]

At -121dBm, the Intel variant performed more in line with its Qualcomm counterpart. Overall, the average performance delta between the two is in the 30% range in favor of the Qualcomm

Cellular Insights also created a chart that compares the edge of cell performance of several different smartphones. The increasing numbers on the X-axis below represent increasingly poor signal strength, while on the Y-axis, a higher throughput number indicates better performance. The iPhone 7 Plus with an Intel modem demonstrates the poorest performance of all phones tested.

For more information on the testing methodology and greater technical detail on the results, make sure to check out Cellular Insights' full comparison article.

This is a total non-story. Any significant drop off on these charts starts at -105dB.

That's BARELY two bars (1 bar is -107 and lower). Plus their controlled test doesn't take into account any attenuation due to atmospheric conditions.

Nothing ticks off a customer more than the feeling that their phone is performance-disadvantaged to other same model iPhones due to chance.
Score: 25 Votes (Like | Disagree)

thisisnotmyname
So this is the new TSMC vs Samsung chip debate. Oh well, I have the "slow" modem and haven't been at all disappointed in real world performance.
Score: 24 Votes (Like | Disagree)

supersalo
This is a total non-story. Any significant drop off on these charts starts at -105dB.

That's BARELY two bars (1 bar is -107 and lower). Plus their controlled test doesn't take into account any attenuation due to atmospheric conditions.

ahostmadsen
In order to save a few $ by pitting suppliers against each other, Apple shortchanged their customers. I have the Intel version, and I'm very upset with this. First, it is severely constrained when traveling abroad. And now, even when at home, it is inferior to the same price Qualcomm version. Shame on you Apple. Give a partial refund to customers with an Intel modem. You sell two products at the same price, one is clearly inferior to the other, but you don't tell customers. You should charge less for the Intel version.
Score: 17 Votes (Like | Disagree)

jgelin
I have the intel modem (slower one), here is my speed test from this morning on the newest beta:
Can’t say i am disappointed.