With the introduction of the iPhone 7, Apple did away with the classic click-mechanism home button in favor of a "solid-state" pressure sensitive one that uses haptic feedback to mimic traditional button presses.

The programming that controls the Taptic Engine-powered feedback is deeply integrated into iOS 10, so much so that it appears Apple's latest iPhone is able to automatically offer a temporary workaround when its diagnostic software senses that the technology is playing up. 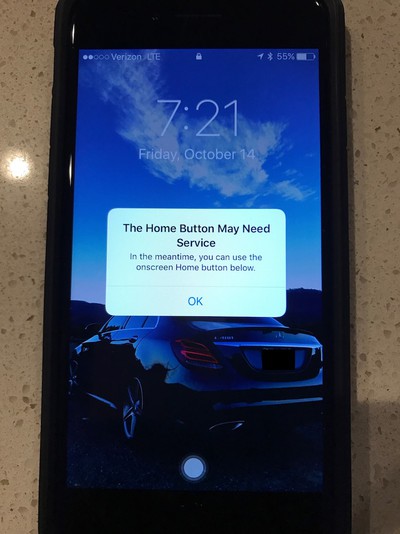 MacRumors forum member 'iwayne' shared the above picture of his iPhone 7 display after the device unexpectedly turned itself off while charging and the haptic feedback began malfunctioning after a restart. A dialog prompt warns that the home button is in need of repair, but presents an alternative onscreen home button for temporary use until the phone has been turned in to Apple for servicing.

MacRumors has previously noted that the Taptic Engine can become unresponsive if the OS freezes, which forced Apple to change the reset process for the iPhone 7 series. Apple has also apparently safeguarded against instances when the button's haptic sensor system breaks completely, but whether or not its failure rate is any better than a physical button remains to be seen.

Rumors suggest Apple will ditch the iconic home button entirely for next year's "iPhone 8" in favor of one built directly into an edge-to-edge display, but it's unclear if Apple intends to implement the same button-based recovery methods for instances in which devices freeze or stop responding completely.

Software is much more prone to bugs than hardware failure. Physical buttons are best in many instances!

The physical button of the iPhone has constantly been a point of failure, to the point that in Far Eastern countries often it isn't used at all to preserve the resale value (they use Accessibility features instead).

In the car, touch controls are bad for a completely different reason: because you can't find them without looking.
Score: 100 Votes (Like | Disagree)

Plenty of issues here as well. Kinda happy mine hasn't arrived yet.

If it hasn't arrived yet, how can you have issues there?
Score: 77 Votes (Like | Disagree)

Adam Warlock
Just one more point of possible failure that will end up frustrating customers. The car manufactures began using touch controls for volume, temperature, etc a few years back until, unsurprisingly, they started returning to physical buttons shortly thereafter. Software is much more prone to bugs than hardware failure. Physical buttons are best in many instances!
Score: 48 Votes (Like | Disagree)

It's good to have a fallback, but the aim is to never need a fallback. Why is a device so new already popping up such errors? iPhone 7 is truly an experimental device release. Looking forward to 2017's all new device.

You know how many iPhone 7's have been sold, right? Millions. If only one of 1 million iPhones has this problem it means 0.0001 %. But yeah this iPhone is such an experimental device. Please stop posting this nonsense.
[doublepost=1476529947][/doublepost]

Never heard that. Why would people in the Far East be more sensitive to preserving their home buttons than in the West?
That's one reason, certainly, but it's also because of higher failure rates & poor feedback.

Then don't post such arguments if you don't know nothing. iPhone's old physical Home Button is the part that has to be repaired the most.
Score: 33 Votes (Like | Disagree)

keysofanxiety
This is properly clever. It also demonstrates just how much thought Apple put into designing the new home button. Not only how it functions when it goes right — but what happens when it goes wrong.
Score: 27 Votes (Like | Disagree)
Read All Comments