Apple Pay Launches in New Zealand Through Partnership With ANZ

Apple Pay in New Zealand is available through a partnership with ANZ bank, meaning it can only be used with Visa credit and debit cards issued by ANZ at this time. Some banks in Australia and New Zealand have been reluctant to accept Apple Pay due to the fee Apple collects. ANZ executive Liz Maguire told Stuff Apple Pay was worth the fee. 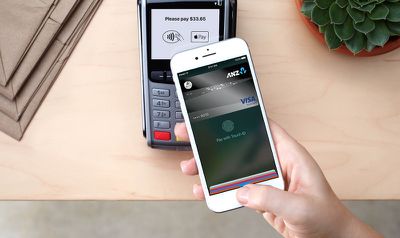 "For us it much more about the value it brings out customers than anything else. I think we're going to see a lot of people using it because it's so easy."

She said the bank had received enquires from new customers but did not say how many.

"We think there's a lot of interest for Apple Pay in the market and when it was announced there was a lot of commentary on social media saying 'when is my bank going to offer Apple Pay'".

In New Zealand, Apple warns that a PIN may be required for purchases over 80 NZD, a restriction also implemented in several other countries for security purposes. For purchases under 80 NZD, no confirmation beyond Touch ID (or skin contact on an Apple Watch) is required.

Apple Pay will soon expand to Japan, Spain, and Taiwan.

I've got three chip cards (two credit and one debit) linked to my Apple Wallet and I've never been prompted to insert a card.

Perhaps this is a merchant-level issue with their implementation?

This is accurate. I had this come up too, twice. It turns out the cashier didn't know how to properly do the transaction in both instances. In both cases, also, they were very insistent that they were right and pushed back because they didn't understand why I was refusing to risk my security by using the card directly. Thankfully, other employees who knew how to do the job helped.
Score: 5 Votes (Like | Disagree)

It's been two years, I think it is safe to call it that Apple Pay isn't changing the world at all, who cares what country is implementing it next.

What's your definition of "changing the world"? There are always going to be people who won't use stuff like AP.

IMO it's probably going to be a generational thing, with it not adopted by older people and younger people using it more often.
Score: 4 Votes (Like | Disagree)