Feral Interactive has announced that the "full experience" of hugely popular war strategy game Rome: Total War will be coming to iPad this fall for the price of $9.99.

The third title in the Total War series, Rome has been hailed as "not only one of the best strategy games ever, but one of the best PC games, period", according to MacRumors sister site TouchArcade, and Feral is promising a port of the game to iPad "without compromise". 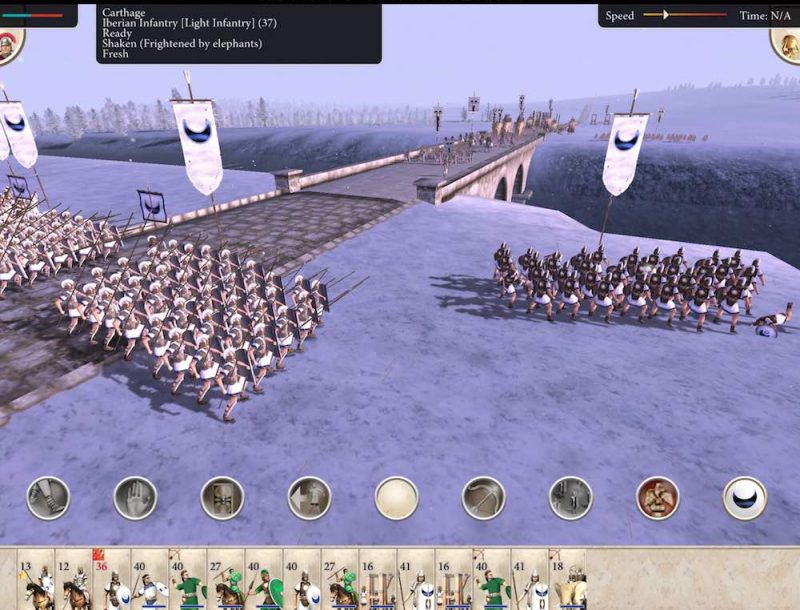 In what's considered the highlight of the series, players get to take control of one of three Roman houses vying for control of the Republic/Empire. The turn-based strategy gameplay is punctuated by real-time battles in 3D, where players command and control huge swathes of units in the field.

ROME: Total War is a strategy game of epic scale, offering players a seamless integration of strategy and tactics to fight spectacular battles, while using diplomacy, subterfuge and assassination to pave the road to ultimate victory.

The game will require a first-generation iPad Air or newer, an iPad mini 2 or newer, or any iPad Pro. It also needs just under 4GB of free space to install.

An exact release date has yet to be confirmed, but you can learn more at Feral's mini-site for the game here.

MacBAir
What an awesome game, this is/was.

For me, it was by far the best TW game. It's a shame that Rome 2 was a buggy incomplete POS. Despite this game being probably my favorite ever, I'm now officially a Civ guy because the game is so great on every single metric, never gets old, and all you need is a mouse. Also because I have an HD3000, and Civ5 runs fine on my Air while let me enjoy the gameplay.

Also, the Civ series would be perfect on a 12.9 iPad Pro! Seriously. It is less about action with more in depth learning and strategy. It's like chess, with history books, with great UI and graphics, while trying to rule the world!

Don't you guys think that the Civ 4 and 5 would be perfect on an iPad?
Rating: 4 Votes


You and me both. 16 GB is barely enough for maybe one or two games, some books, and a handful of small apps, not much more.
Rating: 2 Votes

sp3k0psv3t
I like the ongoing convergence of games and apps for both computers and portable devices.

Raises the question more so of when will a single computational unit be introduced containing the best OS, portability/mobility, functionality, productivity, efficiency, price point, content consumption, applications and security.

The "convergence" as they say is coming; continue on...

iPads, touch enabled tablets, laptops, large-screen phones, and portability have all brought us closer, but much work remains.

Hoping for a bright future with the presence of a singular device meeting all my needs.

To the future and beyond!

vseera
Oh boy can I just say..I can't bloody wait to have my hands on it!!!

I really really hope they release it soon. Have been talking about this game on the TouchArcade forums as well and its surprising how few are talking about.

To me, this is one of the best games ever for PC. And to have it come on the iPad, so it's portable and I can take my battles everywhere, is just epic :)
Rating: 1 Votes

Clearly the best game would be the Civ turn based part with TW style battles.


Don't wait. Make this happen and reap the rewards. :D


The Warrior archetype is hard wired into the human psyche and manifests itself in all cultures per Carl Jung and other researchers. It's not just about war. It's about overcoming obstacles in your life courageously and games like this can provide inspiration for doing that.
Rating: 1 Votes

Saipher
This game should be released for Apple TV! I would love to play that on a big screen (without needing AirPlay). Hopefully we should start seeing more complex games being release for Apple TV once the 5th one comes out. Multiplayer support on the same TV would be awesome too! As Apple's A Series processors become more power, it's just a matter of time before we start seeing console quality games at the App Store. Apple TV would be the perfect device to deliver such content to out TVs.
Rating: 1 Votes

jeremy.pereira
Clearly the best game would be the Civ turn based part with TW style battles.
Rating: 1 Votes

MTShipp
If no IAP a definite buy from me.
Rating: 1 Votes

I think at this point I'd like a version where the only weapons are Tsar Bombas, or we can engineer a chimera virus and just wipe out the human species once and for all.