Originally developed by Avalanche Studios and published by Warner Brothers Interactive Entertainment, the game features an original story set within the universe of Mad Max. 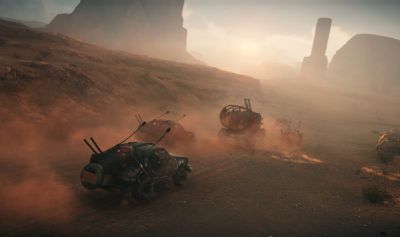 Players take the role of lone warrior Max and must fight for survival against The Wasteland's savage factions by engaging in melée combat and vehicular combat.

Following the theft of his Interceptor, Max teams up with the gifted mechanic Chumbucket to build the ultimate survival vehicle, the "Magnum Opus". Players can design, customize and upgrade their vehicle by choosing from different car chassis and a myriad of upgrades including mounted weapons, armor and engines in order to escape to the Plains of Silence.

As they navigate The Wasteland, gamers will encounter a huge variety of enemies, in a gigantic post-apocalyptic open-world with a range of immersive locations, many of them remnants of the world before the apocalypse.

Originally debuting on console and PC last year, Mad Max was praised by reviewers for its car combat mechanics and graphics, although some criticized the story as well as the melee combat's more repetitive elements.

The minimum system requirements for Mad Max are an Intel i5 3.2 GHz CPU with at least 8GB RAM, 2GB or better graphics card, and Mac OS X 10.11.6 or later. The game also requires an NVIDIA 680 or AMD R9 290 series graphics card or better.

Further information is available at Feral's mini-site for the game.

Verita
So, since Macs have 2014 hardware, and this game has some ridiculous minimum requirements… I guess it's not really coming out for the Mac!
Score: 6 Votes (Like | Disagree)

keysofanxiety
Feral are fantastic. I'm infinitely grateful for their work to bring big titles to the Mac.
Score: 5 Votes (Like | Disagree)

adamjackson
I don't know the cost of porting a game to Mac but with those requirements, there has to be less than 5% of Mac Users that can play the game. My machines were in the $3K+ range in cost per machine and do meet requirements but if I had spent $1999 or less, I'd be out.

(retina i7 MBP w/ discreet graphics & 5K i7 iMac w/ 4GB GPU) Most of the laptops I see apple sells have built in Intel graphics.
Score: 3 Votes (Like | Disagree)

Ulisescm
I'm fine with the PS4 version, thanks
Score: 2 Votes (Like | Disagree)

Very nice. I assume the high-end cards required means that it only runs on Metal?

The requirements are pretty much the same as for the Windows version, so that's not indicative.

Someone asked them on Facebook regarding Metal, and they didn't confirm it:

No news on Metal right now. We'll send you more info down the line.