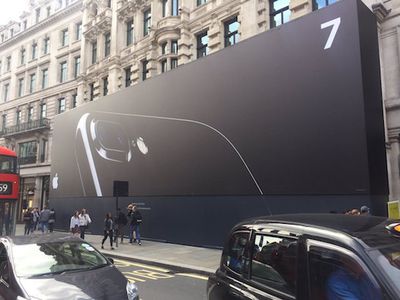 Apple Regent Street with "opening soon" construction barrier in late September (Sebastian Anthony via Twitter)
Apple contracted award-winning architecture firm Foster and Partners to design the layout of the new store, which initially remained open for business at the basement level but has been fully closed since June 13.

MacRumors exclusively reported on the remodeling plans last year, including the removal of four Apple logos affixed to the store's facade in order to allow more natural light inside and preserve the historic look of the building. Like other renovated stores, Apple Regent Street will feature Apple's next-generation retail design.

Apple Brussels exemplifies Apple's next-generation retail design
The renovations included the relocation of three columns to create a more spacious feel, replacing the central glass stairs with two new side staircases, and re-configuration of the Backroom with improved facilities for employees. The store's overall square footage has been reduced by 4,400 square feet, or around 25% of the current size.

Apple Regent Street prior to closing for renovations
Apple Regent Street opened in 2004 and attracts over 4 million visitors per year. The iconic store expanded two years later to become Apple's largest at the time. Apple has contracted Foster and Partners for several other projects in recent years, including the design of its Campus 2 and Apple Union Square.
Tags: United Kingdom, Apple Store
[ 47 comments ]

otternonsense
So Apple is redesigning its stores to better feature 4-year old computers, 3-year old phone casings, a tepid smartwatch and a sea of tablets. Maybe it's the products that need a major overhaul and not the shelves Angela puts them on? Maybe the priorities of this company are ass backwards?
Score: 5 Votes (Like | Disagree)

Freida
I walked by few days ago at night time when the construction workers were offloading delivery (most likely tables) so I had sneak peak inside. Yes, it does have trees there and it looks totally different. I didn't recognise it at all. It did look gorgeous though so I'm curious to see the final thing.
Score: 4 Votes (Like | Disagree)

I hope they preserve the look of the building facade. "Modernizing" the look of a store in a historic building is not a good thing.

The front of the store won't change very much, Regent street is owned by the queen and managed by Crown Estates on her behalf.

Many years ago I opened a store on Regent Street the restrictions are huge..
Score: 3 Votes (Like | Disagree)

jonnyb
Hooray - London will be back up to its full complement of locations at which you can't get a Jet Black iPhone.
Score: 3 Votes (Like | Disagree)

Goatllama
Wait, are there trees inside the store? :eek:
Score: 2 Votes (Like | Disagree)

Sandybox
Wow, paying Fosters for some minor renovations....unbelievable. Apple is in La La land. For heavens sake its a glass fronted shop with a few tables and shelving from Ikea in it. Its not some deep and meaningful piece of architecture, its a sodding shop.
Score: 2 Votes (Like | Disagree)
Read All Comments