Apple today updated its investor relations page to note that the company's earnings report for the fourth fiscal quarter (third calendar quarter) of 2016 has been moved to Tuesday, October 25 due to a scheduling conflict.

As announced last week, Apple originally had scheduled the call for Thursday, October 27. It is not clear what conflict has arisen that is causing the meeting to be moved to a new date. 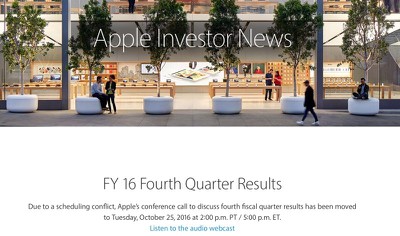 Apple's 4Q 2016 earnings report will provide a look at initial iPhone 7 and iPhone 7 Plus sales, giving us our first hint at how well the two devices have sold compared to the iPhone 6s and the iPhone 6s Plus.

agustinbg
I hope it's because of the announcement of new Macs.
Score: 30 Votes (Like | Disagree)

Kiro
We all know that it will be due to the new watch band event end of oct, right?
Score: 24 Votes (Like | Disagree)

Rogifan
Good god comments here get worse by the day. As bad as the bile you see on Yahoo and other places that allow article comments.
Score: 11 Votes (Like | Disagree)

I hope it's because of the announcement of new Macs.

You and the rest of the world.
Score: 9 Votes (Like | Disagree)

No doubt they'll find a way to spin those numbers to make them sound positive.

Pretty much all products seem to be in decline except online services (see previous article about Apple Watch) and revenues and profit are dropping accordingly. Yet Apple stubbornly keeps its margins as high as ever. They won't reduce them even temporarily because that would produce an expectation to keep them at a lower rate. At a certain point though you have to wonder, are they happy to see volumes and revenue decline further? I think they'll be paying close attention to market share yet there's already evidence to suggest gains there have slowed or halted too and may even be going backwards in some categories.

They'll need a knockout Mac refresh to bring some life and excitement back to the Apple ecosystem. And I think Tim and the rest of the board should be on notice.

Expect the typical corporate non-speak and self-promotion at such events anyway.

"No doubt they'll find a way to spin those numbers to make them sound positive."

Funny. I mean a company making $8 billion in 12 weeks is pathetic, right?

Apple are Doomed ™
Score: 7 Votes (Like | Disagree)
Read All Comments

Monday March 1, 2021 6:44 am PST by Sami Fathi
Apple faces a new class-action lawsuit that accuses it of deliberately releasing iOS updates that slowly reduce the performance of an iPhone, forcing customers to upgrade their devices. The lawsuit comes from the Portuguese Consumer Protection Agency, Deco Proteste (via Marketeer), which in a statement says that it will proceed with a case against the Cupertino tech giant because it...
Read Full Article • 261 comments

Monday March 1, 2021 7:50 am PST by Joe Rossignol
iPhone 13 models will all feature a smaller notch, while the two Pro models will be equipped with low-power LTPO display technology for a 120Hz refresh rate, analyst Ming-Chi Kuo said today in a research note obtained by MacRumors. Several other sources have previously claimed that some iPhone 13 models will support a 120Hz refresh rate, including display industry analyst Ross Young, leakers ...
Read Full Article • 86 comments